By 1916, concern among British daffodil growers had reached panic levels. A mysterious disease was sweeping through the many ornamental varieties of plants in the Narcissus genus—popular garden flowers and a substantial source of income for commercial horticulturalists. Growers watched helplessly as their daffodils’ leaves twisted, the bulbs discolored, and the plants withered and died.

“It was a massive deal,” says Fiona Davison, head of libraries and exhibitions at the Royal Horticultural Society (RHS) in London. “Commercial growers could see years’ worth of work wiped out in one season.” 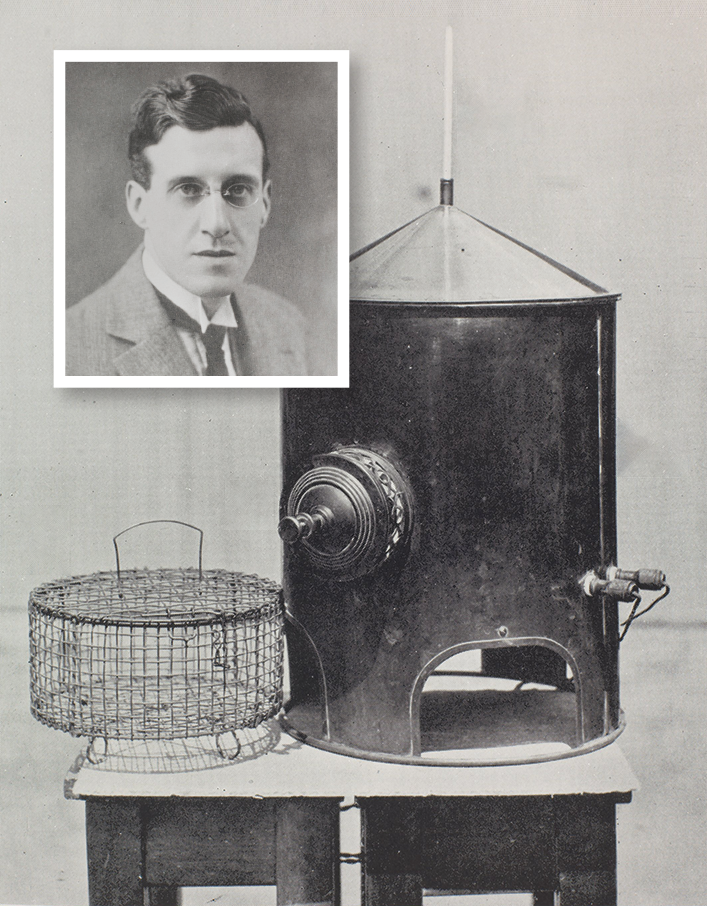 HOT BATH: Ramsbottom (top left) used a copper boiler with a removable basket in his daffodil parasite experiments. According to his report, published in the RHS journal, “soaking the bulbs for a period of two to four hours in water at a constant temperature of 110 °F” would “afford an economical means of combating...

Many horticulturalists suspected that the disease was caused by a fungus, but no one could figure out how to halt the die-offs. So, at a March 1916 meeting of the RHS’s Narcissus and Tulip Committee, one attendee proposed an urgent resolution: that the RHS investigate what was infecting the plants and devise a plan to defeat it.

The RHS adopted the resolution, and assigned the task to 24-year-old James Kirkham Ramsbottom, a top horticultural student at the RHS Garden in Wisley near London. To supply him with the necessary materials, the Society put a call out for growers to send in their diseased bulbs. The response, Ramsbottom wrote in a paper published several months later, was “splendid. . . . Hundreds of bulbs passed through my hands even during the first few weeks of the investigation.”

After painstakingly dissecting the bulbs to create thousands of microscope slides, Ramsbottom found that, while many did contain fungal infections, all contained a small parasitic worm—specifically, the stem eelworm, Tylenchus devastratix—that he identified as the real culprit.

He immediately launched experiments on how to kill it. “He looked at chemical treatments, dousing the bulbs, spraying the plants, using gas, formaldehyde,” says Davison. “The thing that he found was most effective was heat treatment, specifically immersing the bulbs in [hot] water. . . . 110 Fahrenheit, or 43 degrees Celsius, between two and four hours, and it was as simple as that.”

The treatment left daffodil bulbs unharmed and parasite-free—just the fix growers had been waiting for. Ramsbottom presented his findings at the RHS on May 8, 1917 to widespread acclaim from the horticultural community, and was awarded the society’s Peter Barr Memorial Cup for his efforts.

But Ramsbottom’s fame was fleeting. In February 1925, while on a lecture tour in the US, Ramsbottom suffered fatal injuries when he fell from a high hotel window in New York. He died at just 33 years old. These days, he’s all but unknown outside daffodil-growing circles—where his eelworm-killing protocol is still used almost exactly as it was a century ago.

The RHS is now hoping to boost his recognition. As part of an exhibition scheduled for spring 2021, the society’s Wisley laboratories will open to the public, complete with the equipment Ramsbottom used in his experiments, and a commemorative plaque about his contributions.

“He’d been so rigorous in the way he attacked this,” says Davison. “He pretty much saved the daffodil industry.”