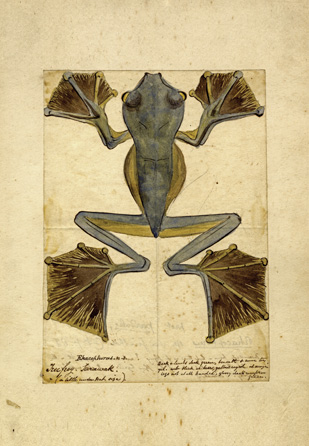 RAINING SPECIMENS: Wallace painted this watercolor of Rhacophorus nigropalmatus in 1855. A newly discovered species, the frog was found in a part of Borneo’s rainforest that echoed with the sounds of workers felling trees and transporting coal. The disturbance brought a diverse range of creatures out of hiding and, in the case of the frog, into the scientific record books. As Wallace wrote on the back of the watercolor, the frog “descended from a high tree as if flying.”© ALFRED RUSSEL WALLACE MEMORIAL FUNDOne day in 1855, in the teeming rainforests of Borneo, a bizarre-looking frog glided down from the canopy, its webbed feet spread, and landed in the scientific literature. For when a Chinese laborer working in the area caught the green-and-yellow creature, he took it to the British naturalist Alfred Russel Wallace, who was collecting specimens nearby.

Fascinated by his amphibious gift, Wallace painted a...

But at the time he first laid eyes on the frog, Wallace would not have called himself a “Darwinian,” though the two had met and corresponded. Indeed, there was no such term in 1855. Earlier that year, Wallace had holed up for the rainy season in a small house in Borneo’s Sarawak region to rest, recuperate from his exertions in the field, and write. It was there that Wallace produced his famous “Sarawak Law” paper, in which he articulated the idea that geography is related to the distribution of species, with natural barriers like mountains and bodies of water giving rise to closely related but separate species. Furthermore, he noted, new species arise from existing ones, branching off from each other like new limbs on a tree.

Although Wallace had been interested in the idea of evolution since 1845, the Sarawak Law paper, published in September 1855, “was his first real attempt to promote his evolutionary views,” says George Beccaloni, curator of cockroaches and related insects at the Natural History Museum in London and director of the Wallace Correspondence Project.

Three years later, in 1858, Wallace and Charles Darwin jointly published a landmark paper outlining the theory of evolution by natural selection. Around the same time, Wallace was preparing notes for a book on evolution. “If you compare his ideas with Darwin’s notes, they’re incredibly alike,” Beccaloni says. But that book was never published. Wallace abandoned it when Darwin released On the Origin of Species, a decision that meant Wallace received relatively little recognition in the 20th century, when interest in Darwin’s ideas surged.

But with the recent rediscovery of a collection of Wallace’s paintings and sketches from the Malay Archipelago—including the original watercolor of the flying frog—and the publication of his correspondence with Darwin and others, Wallace’s contributions to science will, Beccaloni hopes, likewise become less obscure. “It will take quite a few years, but hopefully we’ll start getting people to look at Wallace more seriously and in more detail, and hopefully eventually he’ll get the recognition he deserves,” he says.