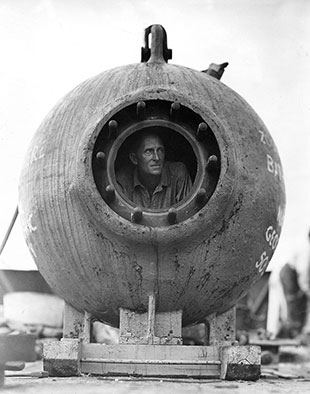 BEEBE IN THE BATHYSPHERE: Naturalist William Beebe peers out of the access hatch of the bathysphere, a metal capsule he used to probe the contours of the ancient volcano under Bermuda and to study how light and marine life changed at ocean depths previously inaccessible to human explorers. “There’s an amazing sense of wonder and awe when he’s looking through the bathysphere window,” says Carol Grant Gould, author of a biography of William Beebe. “He never, ever lost that.”COURTESY WILDLIFE CONSERVATION SOCIETY ARCHIVES. IMAGE © WCS. On August 15, 1934, two tall, lanky men squeezed through the tiny hatch of a 57-inch-wide steel ball that was then dropped into the deep sea off the coast of Bermuda. Naturalist William Beebe and the orb’s inventor, Otis Barton, were already familiar with the damp, uncomfortable quarters inside the sphere. Despite the danger of being suspended by a single cable, Beebe...

In a 1926 article in The New York Times, Beebe, a noted American ornithologist-turned-marine biologist had outlined his wish to go deeper than the 60 feet his diving suit would allow. In response, Barton, an engineer studying natural history in graduate school at Columbia University, designed the bathysphere to protect against the high pressure of the ocean depths. By the 1930 summer research season, the 5,400-pound sphere made of inch-and-a-half-thick steel was ready for its inaugural dive. The first manned descent lasted 15 minutes and only reached 45 feet below the surface, but after testing unmanned descents to greater depths and working out some kinks, Beebe and Barton progressed to depths of a quarter of a mile.

On September 22, 1932, Beebe conducted the first-ever international live broadcast from the U.S., speaking to radio listeners from the bathysphere 2,200 feet down. Peering out of a single three-inch-thick window of fused quartz, Beebe described the strange, unknown life-forms he saw. In Half Mile Down, his book describing the bathysphere’s journeys, he wrote of siphonophores “lovely as the finest lace” and “pteropods, or flying snails, each of which lived within a delicate, tissue shell, and flew through life with a pair of flapping, fleshy wings.” Beebe’s vivid descriptions inspired underwater explorers like Jacques Cousteau for decades to come, says Beebe biographer Carol Grant Gould.

These days, visitors can see the brilliant blue bathysphere, which belongs to the Wildlife Conservation Society, the successor of the New York Zoological Society that funded Beebe’s first expeditions, at the entrance to the New York Aquarium, where it was placed last year in honor of the 80th anniversary of Beebe and Barton’s record-setting dive.

“His meticulous and careful descriptions and the illustrations that came out of those descriptions were really valuable in terms of...deepening our realization of how diverse and odd a lot of that life was,” says the Aquarium’s vice president and director Jon Dohlin. “The idea of taking the bathysphere down a half mile...was so far ahead of its time.”