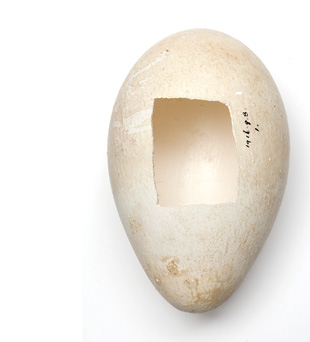 EMPEROR EGG: One of the penguin eggs retrieved by Edward Wilson and his team after an arduous journey through the Antarctic winter. Wilson thought the embryos contained in the eggs would reveal an evolutionary connection between birds and reptiles. © THE NATURAL HISTORY MUSEUM, LONDONAt the dawn of the 20th century, the competition to be the first human to reach the South Pole was in full swing. After his failed 1901–1904 Discovery expedition, British explorer Robert Falcon Scott returned to Antarctica in 1909 for another shot at glory. But his Terra Nova expedition was about more than just bragging rights. Scott and his team undertook a multitude of scientific investigations in zoology, geology, and meteorology. In three years, the team collected tens of thousands of specimens and artifacts that spawned hundreds of scientific papers.

Dedicated to establishing this link, Wilson lobbied Scott to approve a more than 200-kilometer round trip to Cape Crozier, where Wilson and other scientists on Scott’s earlier expedition had spotted an emperor penguin rookery. “This was no whim by any stretch,” says Douglas Russell, curator of birds at the Natural History Museum in London. “Wilson was under no illusions about how dangerous the journey was.”

On June 27, 1911, in the midst of the Antarctic winter, Wilson, Henry “Birdie” Bowers, and Apsley “Cherry” Cherry-Garrard set off in search of emperor penguin eggs.

Through complete darkness, the trio dragged two sledges loaded with supplies for the five-week journey. Temperatures averaged −34 °C and dropped as low as −68 °C. Making camp at night and breaking it the next day took three hours, thanks to frostbite and frozen gear. The men routinely fell into crevasses. Still, 19 days after they headed out, they reached the rookery and retrieved five eggs, two of which cracked on the return trek.

Back at base camp, Wilson cut small rectangular windows in the three unbroken eggs, removing and pickling the embryos. Several months later, while Cherry-Garrard remained at base camp, Wilson and Bowers, along with Scott and two others, reached the pole—34 days after the Norwegian Roald Amundsen and his party. All five members of Scott’s team died on their way back to camp.

The sole survivor of what he dubbed the “worst journey in the world,” Cherry-Garrard transported the three extracted embryos to Britain, where University of Cambridge embryologist Richard Assheton sliced two of them into 800 sections and mounted them on slides. Assheton died before completing his examination, and the slides eventually made their way to anatomist Charles Parsons. By the time Parsons published a monograph about the embryos in 1934, recapitulation theory had largely been discredited. Also, because the embryos were at a later developmental stage than Wilson realized, Parson concluded that the specimens “have not contributed much to the understanding of the embryology of penguins.”

“The value of the eggs is not in their scientific output,” says Russell, who now oversees the collection. “They serve as a beautiful example of the lengths that people have gone to understand the natural world.”