Drops of blood, filter paper, bacteria, a bacterial inhibitor, and a baking dish—that’s all it took for microbiologist Robert Guthrie to develop a basic test for phenylketonuria, a genetic metabolic disease that, if left untreated in infants, soon leads to neurological dysfunction and intellectual disability. The test would lay the foundation for screening newborns for diseases.

In 1957, Guthrie met Robert Warner, a specialist who diagnosed individuals with mental disabilities. Warner told Guthrie about phenylketonuria (PKU), now known to affect roughly 1 in 10,000 children. The disease makes it impossible to break down the amino acid phenylalanine, so that it builds up to toxic levels in the body and disrupts neuronal communication. Once a child was diagnosed, a strict low-phenylalanine diet could prevent further damage, but Warner had no easy way to measure phenylalanine levels in his PKU patients’ blood to monitor the diet’s effects.... 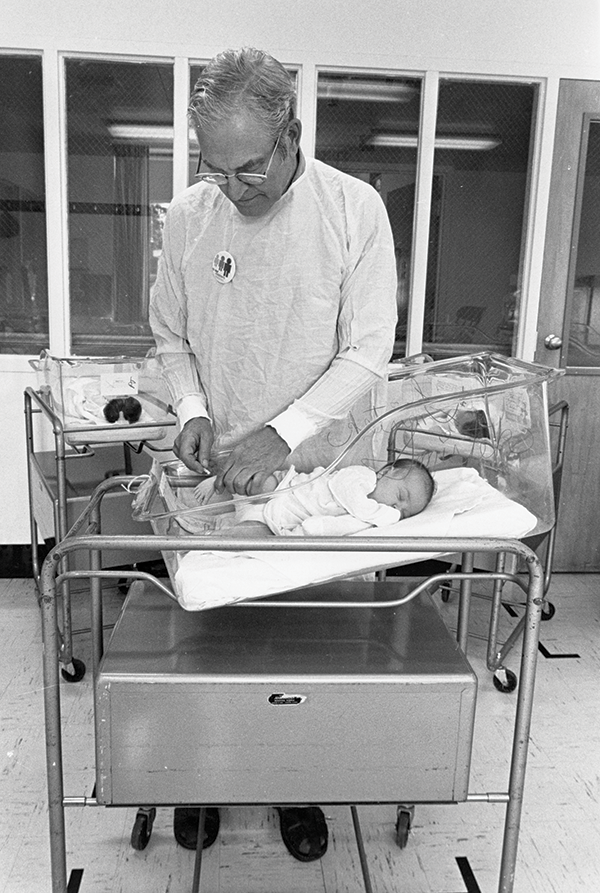 BABY’S FIRST TEST: After developing newborn screening, Robert Guthrie went on to work to combat lead poisoning. Similar to the assays for PKU and other diseases, the test for lead levels in a newborn’s blood was based on a heel prick. Guthrie is shown here collecting blood in 1982.
Courtesy University Archives, University at Buffalo, The State University of New York

Guthrie reported back to Warner three days later with a solution. Guthrie knew from past work that the bacterial inhibitor β-2-thienylalanine blocked Bacillus subtilis from flourishing by substituting for phenylalanine in growing peptide chains, resulting in inactive proteins. He also knew that adding phenylalanine to the cell cultures restored normal protein function and spurred the bacterium’s growth. So his solution was simple: prick the skin, collect a few drops of blood on filter paper, and place the filter paper in a baking pan covered in β-2-thienylalanine. Add Bacillus subtilis to the filter paper and heat the pan overnight. If the bacterium grows exponentially, the level of phenylalanine is high. The assay worked well, so Guthrie used it as a model to develop tests for other metabolic diseases.

Then, in 1958, Guthrie’s own 15-month-old niece was diagnosed with PKU based on a urine test. That test could only detect phenylalanine at relatively high concentrations, and it thus delivered false negatives and missed detecting PKU in many people—particularly in young babies—who did, in fact, have the disease.

Guthrie used his bacterial assay to analyze his niece’s blood and confirmed that she had PKU. Unfortunately, she had already suffered neurological damage. Guthrie became convinced that his test, if used at birth, could help children avoid PKU-associated intellectual disabilities by allowing doctors to put them on a special diet early on.

“That you could take drops of blood from every newborn baby and do a test . . . Bob Guthrie really deserves the credit for that vision,” says Jeffrey Brosco, a pediatrician at the University of Miami Miller School of Medicine and coauthor of The PKU Paradox, a book about the disease and the history of newborn screening. Guthrie started clinical trials, tweaking the test to use a heel stick and cardstock to collect each baby’s blood. When the test proved effective, he lobbied state governments to mandate its use on newborns, and despite pushback from the medical community, which questioned the need for PKU screening because the disease was so rare, Guthrie succeeded. By 1967, newborn blood screening became mandatory in most US states; it is now standard in many countries around the world and includes testing for more than 50 conditions.

“The vast majority of medical [innovations] don’t get to patients for decades,” Brosco notes. “We should celebrate Guthrie for making sure so many children, not just a select few, immediately had access to his test . . . and also the fact that he didn’t patent and monetize the test, a selfless decision, and one rarely made today.”