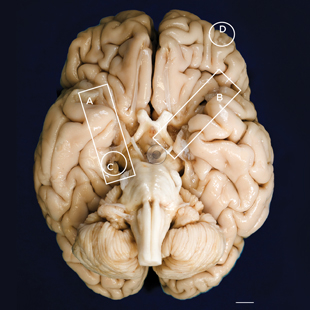 THE SCARS THAT TAUGHT US: The ventral side of H.M.’s brain shows evidence of the surgical scars left by William Beecher Scoville’s 1956 surgery (A and B), which removed portions of the medial temporal lobe, including much of the hippocampus. Also visible is a mark left by one of the surgical clips (C). During the post-mortem analysis, examiners found an unexpected lesion in the orbitofrontal region (D). The portion of H.M.’s hippocampus that remained after the surgery is not visible in this image. (Scale bar, 1 cm)THE BRAIN OBSERVATORY, JACOPO ANNESEIn 1953, William Beecher Scoville performed an experimental procedure on a 27-year-old man who had exhausted all other medical options for treating his severe epilepsy. A medial temporal lobe resection removed most of the patient’s hippocampus, along with pieces of neighboring regions. It succeeded in nearly eliminating the seizures, but left the young man without the ability...

For the next half century, that patient, known as H.M., would become the most studied man in neuroscience. His memory dysfunction helped neuroscientists understand the critical role the hippocampus plays in receiving, processing, and consolidating sensory input. Nearly 100 researchers have studied him, including Suzanne Corkin, who met H.M. in 1962 when she was a graduate student and went on to work closely with him for nearly five decades. Now a professor emerita at MIT, Corkin describes her long-time subject as gentle, intelligent, and gregarious. It was not until 2008, when he died at 82, that H.M.’s identity and real name, Henry Gustave Molaison, was revealed to the world.

On the night Molaison died, doctors set in motion a plan arranged years in advance to preserve his brain. His body was transported to Massachusetts General Hospital, his head wrapped in cryo-paks that had been stored at the nursing home where Molaison lived. Corkin watched as a neuroradiology team performed high-resolution MRIs late into the night.

A neuropathologist then removed H.M.’s brain from his body, after which it was shipped across the country to The Brain Observatory at the University of California, San Diego. There, Jacopo Annese, who heads the Observatory, led the dissection, imaging, and scanning of H.M.’s brain. “[I was] putting myself in Scoville’s shoes and going back into the brain to understand what happened. It was 1953 again,” says Annese.

Annese, Corkin, and their colleagues reported on the findings of the autopsy in a paper published earlier this year, describing the techniques used to finely slice the brain and digitally scan the slices at a resolution of half a micrometer (Nat Comm, 5:3122, 2014). The examination confirmed earlier MRI results from the 1990s indicating that the entire hippocampus had not been removed. Among the new findings was a small scar where Scoville had lifted the left hemisphere in order to insert his surgical tools deeper in the brain. The team also found a lesion in one of the frontal lobes. “That was a postmortem surprise,” says Corkin. There had been no signs of it on earlier MRI scans, and the research team is investigating the extent of the damage.

As a testament to how H.M.’s story galvanized the public’s interest, there have been about 500 requests, many from high school students and teachers, to access the publicly available digital images of H.M.’s brain. Corkin says that’s the way Molaison would have wanted it. “I think he’d feel wonderful about that,” she says. “That was his goal.” 