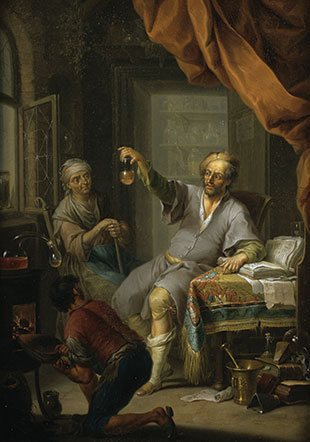 FROM RICHES TO RAGS: The Medical Alchemist, an 18th-century oil painting on copper by Franz Christoph Janneck, depicts a urinalysis scene. Painted during a period when European society transitioned from revering alchemists as legitimate medical practitioners to viewing them as quacks, the piece appears to reflect this latter opinion. The frayed Turkish carpet on the alchemist’s table hints at poverty. His cap—a traditional physician’s hat—sits askew on his balding head, his stocking droops, and the glasses he wears make his eyes appear almost comical. GIFT OF FISHER SCIENCE INTERNATIONAL. CHEMICAL HERITAGE FOUNDATION COLLECTIONS. PHOTOGRAPH BY WILL BROWN. During the Middle Ages, European alchemists, in addition to their quest to transform common metals into gold, often acted as physicians and pharmacists. They diagnosed diseases and concocted cures from herbs and minerals using techniques such as distillation and metallurgy, methods familiar to modern-day scientists.

Early pictorial representations of their work...

Tests of urine—analyzing the color, smell, sediments, or even the taste—were frequently used at the time to diagnose medical conditions. In this painting, the patient, or a maid who delivered the sample, waits for the results, while the alchemist’s assistant keeps a flame going under the distillation apparatus. He’s surrounded by the tools of his trade: herbs dangle from the rafters; a mortar and pestle and a manuscript with alchemical symbols lie at his feet.

Art historians suspect that the rise in the 17th century of a newly rich Dutch middle class—with money to spend on art—brought genre scenes such as this one into vogue. “Alchemy scenes were very popular in the marketplace,” says Amanda Shields, fine arts curator at the Chemical Heritage Foundation in Philadelphia, where the painting is housed. “These could be seen in people’s homes, offices.”

But the mid-17th century also marked the origins of modern chemistry, as Robert Boyle published early ideas of atoms and molecules in his book The Sceptical Chymist. Chemistry and alchemy had largely overlapped before this time. It was an alchemist, for instance, who was the first to isolate the element phosphorus by distilling vast amounts of horse urine in his failed attempt to produce gold. But Boyle’s work initiated the transition of chemistry and alchemy into two distinct disciplines, and artistic portrayals of alchemists painted between the 17th and 19th centuries track this growing separation. Changes in art were a reflection of changes in science and society, according to Shields.

As the two subjects’ practitioners drifted apart, scientists and the mercantile middle class began to ostracize alchemists. Although they were regularly called upon to perform diagnostic tests, alchemists were also becoming objects of mockery and ridicule.  Some paintings still depicted them as practitioners of a legitimate process, but others insinuated quackery—like the alchemist’s shabby clothes and aging laboratory in Janneck’s piece. By the mid–18th century, the subject of The Medical Alchemist is well on his way to being perceived as more sham than scholar. He’s seen “kind of like a quack here,” says Shields. “You get the sense that maybe he doesn’t know [much] about chemistry as a discipline.”