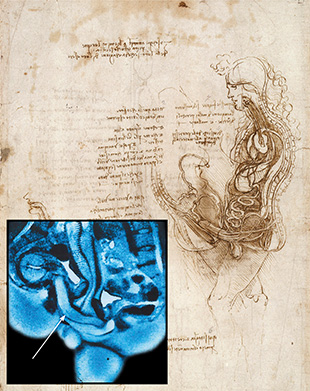 A MOST INTIMATE VIEW: In 1493, Leonardo da Vinci relied on his imagination to depict the anatomy of human intercourse. Since then, researchers have tried to get a better picture, but it wasn’t until the advent of MRI that they could demonstrate that his illustration, which shows the penis remaining straight inside the vagina, was incorrect.
Five hundred years after da Vinci drew his sketch, Dutch researchers asked couples to engage in intercourse while inside an MRI machine (inset image). Such an intimate view was nearly impossible before the new technology became widely available. One of the first things the researchers noticed was that the penis curves in the middle (white arrow), forming a boomerang shape, an unpredicted finding.THE ROYAL COLLECTION © 2014 HER MAJESTY QUEEN ELIZABETH II/THE BRIDGEMAN ART LIBRARY; EDUARD MOOYART, UNIVERSITY MEDICAL CENTER CENTER GRONINGENWhen Pek van Andel of the University of Groningen in...

In 1992, van Andel and his team began to recruit couples to copulate inside an MRI machine. Ida Sabelis, the first woman to have participated, described the odd situation: “Confined by the space, we make the best of it,” she wrote in 2000. She recalls being jarred by a voice emanating from speakers inside the scanner: “The erection is fully visible, including the root.” The experiment advanced in fits and starts as the team dealt with challenges, including squeamish hospital administrators. “It was a very interesting 10 years for me,” van Andel’s colleague, Willibrord Weijmar Schultz, says with a chuckle.

The researchers published a paper in 1999 demonstrating that long-held beliefs, including those illustrated by da Vinci, about the anatomy of intercourse were wrong (Br Med J, 319:1596-600, 1999). For example, when inside the vagina, the penis does not stay straight; it forms a boomerang shape. More surprisingly, in the root of the penis, the portion that lies inside the man’s body cavity, “the erection is as long as [in] the pendulous part,” says Weijmar Schultz. The team also realized that the 1966 observation by William Masters and Virginia Johnson that the uterus enlarges during intercourse—based on manual palpation of women stimulated with an artificial penis—was mistaken: what Masters and Johnson felt was probably the bladder filling with urine.

In 2000, the MRI study won the dubious distinction of an Ig Nobel Prize. In his acceptance speech, van Andel said that the hardware and software had no problem accommodating the couples. As for “the wetware, we had more than enough volunteers,” he told a laughing crowd. “The problem was the red tape.” 