ABOVE: An undated bronze plaque depicts Cotton Mather attempting to persuade other people of the utility of inoculation. The work was part of a group of four bronze plaques showing episodes from the history of the Mather family, which were donated to the Art Institute of Chicago in 1926.
UNKNOWN ARTIST. REV. COTTON MATHER (SON OF INCREASE) USING HIS POWERFUL INFLUENCE TO OVERCOME THE PREJUDICE AGAINST INOCULATION FOR SMALLPOX IN BOSTON, 1721, FOUND 1926. THE ART INSTITUTE OF CHICAGO

Little is known about Onesimus, one of the thousands of Africans who was kidnapped from his homeland in West Africa, forced into a perilous transcontinental voyage, and sold into the slave trade in the Massachusetts Bay Colony in the 18th century. Yet Onesimus is known for changing the course of history by spurring the first recorded inoculations in the New World, which helped pave the way for the development of the first vaccines 75 years later.

Cotton Mather, a Puritan minister infamous for his role in the Salem Witch Trials, received Onesimus in 1706 as a gift from his congregation. Mather named him after a slave in the Bible whose name means “useful” in Greek. According to a letter Mather later wrote to an English friend, at some point, Mather asked Onesimus if he’d been previously infected with smallpox, as slaves were worth more if they had previous exposure to the virus. Mather wrote that Onesimus replied, “Yes and no,” an answer that left Mather puzzled.

Onesimus elaborated, saying that he’d been deliberately exposed to smallpox back in his home in Africa. Mather wrote that “he had undergone an operation which had given him something of the smallpox, and would forever preserve him from it. . . . He described the operation to me, and showed me in his arm the scar which it had left upon him.” What Onesimus described is now known as inoculation, a precursor to vaccination that was known to folk medicine in remarkably many areas, from Central Asia to Wales, yet had not come to the attention of physicians in England or its American colonies. Generally, pus from an infected patient was rubbed into a cut or needle prick on an uninfected recipient, although in China, dried pus was instead blown up the recipient’s nose. While risky, the procedure usually caused the recipient to develop a mild case of the disease and immunity to future infection. 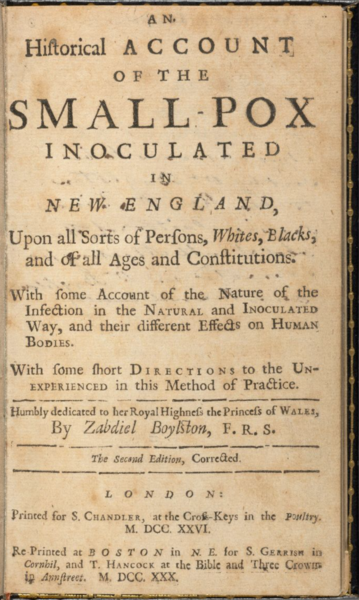 A pamphlet that Boston physician Zabdiel Boylston wrote and sent to the British Crown in 1730 detailing the results from his inoculation of hundreds of Bostonians during one of the city’s largest smallpox outbreaks.
WIKIMEDIA, ZABDIEL BOYLSTON

Mather found confirmation of what he’d heard from Onesimus in a report about inoculation written by a doctor in Constantinople and published in 1716, the same year Onesimus purchased his freedom. Writing in his letter later that year, Mather vowed to alert the city’s physicians to the protective potential of inoculation should smallpox ever return. He didn’t have to wait long: a smallpox epidemic tore through Boston’s population in 1721, the sixth in the 91-year-old city’s history. In haste, Mather wrote to the city’s physicians asking them to meet with him to discuss inoculation, but all of them ignored the invitation.

Mather tried again. He wrote a pamphlet making his case for the practice and enclosed it in a letter to Boston physician Zabdiel Boylston. Boylston tried inoculating his 6-year-old son, his slave, and his slave’s son. None suffered more than a brief, mild illness. These were the first known inoculations in the New World. Most of the colonists could not fathom taking medical advice from an African; Mather was “mocked and scorned for having relied on the testimony of a slave.” As soon as news spread of Boylston’s experiment, Bostonians took to the streets in protest—the first recorded precursor to later anti-vaccination movements. Rocks and even a grenade with a note affixed reading, “COTTON MATHER, you Dog, Dam You: I’ll inoculate you with this, with a Pox to you,” were thrown through the front window of Mather’s home.

“This is a story that showed—like what we’re seeing right now—the anger and ignorance that people will display during a time of pandemic,” says historian Ted Widmer of Macaulay Honors College at CUNY in New York, referring to the COVID-19 pandemic sweeping the globe three centuries after the Boston smallpox outbreak. “They’re furious at the experts even though the experts are trying to help them.”

Following inoculation, Boylston’s experimental “subjects” developed a mild illness but recovered quickly. Few Bostonians were convinced by this evidence; Boylston only managed to inoculate around 280 of the city’s 11,000 residents. Of those inoculated, only six died—a rate about six times lower than among uninoculated residents who contracted the disease, Mather and Boylston subsequently wrote in a pamphlet about the outbreak. In systematically studying the safety and efficacy of the treatment, Mather and Boylston performed among the first quantitative analyses in medicine ever recorded. In 1796, this evidence helped inspire English physician Edward Jenner to create a vaccine for smallpox using cowpox, a less virulent but related virus.

Onesimus has only recently been recognized for his contribution to medical science, earning a place on Boston Magazine’s 100 best Bostonians of all time list in 2016. His final resting place is unknown, and there are no existing portraits of him. Meanwhile, Boylston’s tomb in Brookline, Massachusetts, commemorates Boylston as the person who “first introduced the practice of inoculation into America.”

“Onesimus reversed many of [the colonists’] traditional racial assumptions,” Widmer says. “He had a lot more knowledge medically than most of the Europeans in Boston at that time.”