ABOVE: The owner of a recently-discovered copy of The English Flora from the mid-1800s pressed several plants between its pages, including this specimen from the nightshade family. ROYAL HORTICULTURAL SOCIETY LINDLEY COLLECTIONS

While sorting through books to display in their new library in 2021, staff at the UK’s Royal Horticultural Society stumbled upon a unique treasure: a five-volume set of Sir James Edward Smith’s The English Flora, circa 1830, annotated with botanical drawings, marginalia, and pressings of gentian, willowherb, and kidney vetch. The books’ notes, including an illustration by the midwife George Spratt of a woman made entirely of flowers, suggested their owner had more than a casual interest in botany, but only the scrawled epithets “La Botaniste Miss Allen” and another mention of an Isabella Anne Allen hinted at who they may have belonged to.

“We just wanted to know a little bit more about her,” says Fiona Davison, the head of libraries and exhibitions at the Royal Horticultural Society (RHS) who oversaw an attempt to identify La Botaniste based on these scant clues. Allen, like many women botanists of her time, would have been considered an amateur, and it was unlikely that many records of her persisted, Davison says. “All we’ve got are these little scribbles in a book—nobody made any fuss over her at all.”

Following the Enlightenment, the study of plants became a polite science and a suitably feminine diversion. The translation of Carl Linnaeus’s Systema Naturae and popular books such as Priscilla Wakefield’s An Introduction to Botany—a text written specifically for women and children that entwined botanical knowledge with moral values—helped make botany accessible.

By the early 1800s, many women had already left their marks: cultivating exotic plants, classifying species, maintaining herbariums, and painting botanically accurate color plates. But in an 1829 speech at University College London, botanist John Lindley argued that botany should be considered a worthy occupation “for the serious thoughts of man” and not simply “an amusement for ladies.” 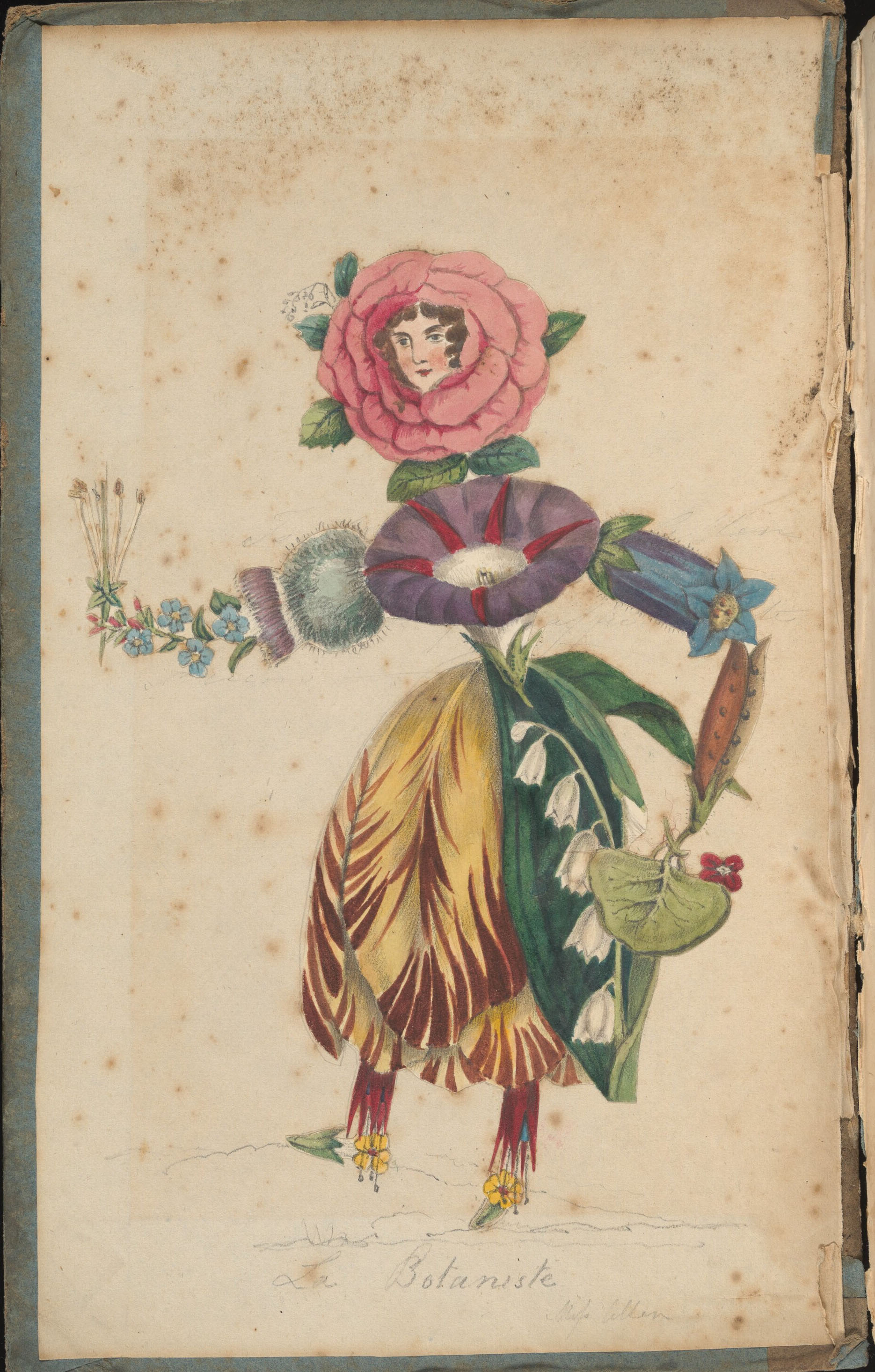 IN THE MARGINALIA: Formed of various flowers, this personification cartoon of a female botanist, painted by George Spratt, was pasted into a recently discovered copy of The English Flora. The title below the sketch, “La Botaniste,” was possibly a self-reference made by Isabella Anne Allen, the book’s presumed owner.
ROYAL HORTICULTURAL SOCIETY LINDLEY COLLECTIONS

Botany moved into laboratories, seminar halls, and professional societies—spaces that historically excluded women, whose interest in plants was considered an “amateurish pastime,” Davison says. In the mid-1800s, research by women went unacknowledged by the Royal Society, and many works were published anonymously. In a 1997 article, York University science historian Ann Shteir opined that “women elbowed in, but then were elbowed out.”

The RHS approached the public for help in identifying La Botaniste, partnering with the BBC to share an appeal. Leads poured in—many mentioning a Miss Allen from Madresfield, Worcestershire. An avid botanist, Miss Allen had lived in a mansion by the River Severn. Clues from the book, such as mentions of the grounds around the property and botanizing visits to surrounding villages, backed this conclusion.

Isabella Anne Allen, the investigation revealed, was born in 1810 to John Henry and Susannah Rebekah Allen. A member of the Malvern Floral Society, Miss Allen botanized frequently, cross-referencing her observations with The English Flora and other books. Allen never married, inherited her estate from her father, and left her possessions to her sister when she died in 1865. Her floral paintings appear to have sold at auction in 1973 and possibly in 2010, though some uncertainty remains about the latter lot’s artist being the same Miss Allen.