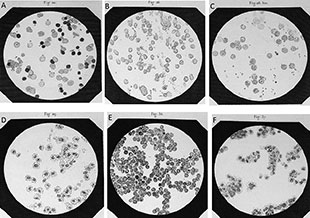 OF BLOOD AND PUS: Alfred Donné’s microscopic views of bodily fluids, published in the supplement to Cours de Microscopie in 1845, allowed for a clearer distinction between white blood cells and pus, which were often confused by Donné’s contemporaries. Such investigations provided a clue to the origins of leukemia as a disease. A) Red and white blood cells from a leukemic patient; B) and C) “mucous globules,” or white blood cells, from the same patient; D) mucous globules treated with acetic acid to visualize nuclei; E) recently secreted pus globules from a different patient; F) pus globules treated with acetic acid to visualize nuclei. COURTESY KIM KAMPENIn 1837, over the objections of skeptical colleagues, Alfred François Donné set up 20 microscopes at his own expense in the lecture hall of the Medical Faculty of Paris. There, he provided practical microscopy lessons to students. His goal was to make...

When Louis Daguerre presented his brand-new photographic technique in 1839, Donné leapt at the chance to modify it to capture his microscopic images to spice up his lectures to ever-growing audiences. Donné’s adoption of such cutting-edge technology established him as a pioneer in the use of photographs—rather than hand-drawn sketches—to communicate scientific discoveries.

One of Donné’s students, John Hughes Bennett, only briefly attended the Frenchman’s microscopy course in 1841, but four years later would credit Donné’s enthusiasm for inspiring his own microscopic investigation of a patient with an enlarged spleen and liver. In the patient’s blood, Bennett found a large number of “colorless corpuscles,” or white blood cells. He named the disease leucocythemia, a condition we now know as leukemia.

A case describing leukemia-like symptoms was first published in 1811, but the few early reports suggested that patients’ thick and milky-white blood was not the result of an overabundance of living white blood cells, but rather due to the blood’s deterioration into pus, which contains dead leukocytes. “When we get samples from patients, we always see the white layer, and for us, it’s normal,” says Kim Kampen, a leukemia researcher at the University Medical Center Groningen in the Netherlands who has written a history of the disease’s discovery (Leukemia Research, 36:6-13, 2012). “But [back then] they didn’t know what it was.”

Bennett was the first physician to recognize that leukemia was a systemic disease rather than a localized infection, but he was not the first to produce microscopic images of diseased blood. That distinction instead belongs to Donné. In 1845, Donné published 80 engravings based on his daguerreotypes of crystals, cells, milk, pus, blood, and more, most at 400x magnification. Some of the samples pictured in the supplement to his 1844 book, Cours de Microscopie Complémentaire des Études Médicales, were sent to him by colleagues in 1839, and were taken from a woman who died of an abdominal tumor (see image). At first, Donné also thought that the blood might contain pus, “but in the end, I was able to observe a clear-cut difference between [pus] cells, and the white cells,” he wrote. “What you see here is a representation of what you still see when you extract the bone marrow from a leukemic patient,” Kampen says.

Today, the credit for the discovery of leukemia often goes to Rudolf Virchow, who gave the disease the name we now know it by in 1847. But the contributions of Donné, Bennett, and others were critical, Kampen says. “They talked to each other and learned from each other’s knowledge. . . . You really accomplish much more if you collaborate, and I think that’s still the case.”