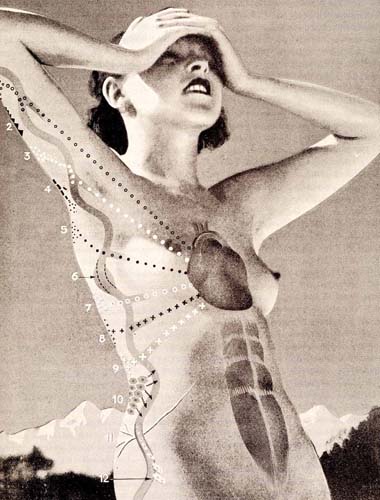 “Sunbathing! The twelve effects of sunlight on the skin: (1) skin reddening, (2) skin tanning, (3) disinfection, (4) immunization, (5) higher blood pressure, (6) stimulation of scavenger cells, (7) increase in tone, (8) vitamin D, (9) cell radiation, (10) the charging of the nervous system, (11) the light hormone, (12) the luminous element porphyrin.” *NOTE: Kahn included the observation of the worsening of scarring in smallpox patients under his section on porphyrins (12) noting that both smallpox patients and people that have been cutaneously injected with hematoporphyrin exhibit photosensitivity. CAPTION OF ILLUSTRATION FROM VOLUME II OF GERMAN PHYSICIAN FRITZ KAHN'S DER MENSCH GESUND UND KRANK, MENSCHENKUNDE, PUBLISHED IN 1939. IMAGE COURTESY OF THE NATIONAL LIBRARY OF MEDICINE

Around the turn of the 20th century—before sunscreens hit the market and the damaging effects of UV radiation were widely appreciated—physicians saw the sun mostly as a source of healing. Sunlit spas...

(3) In 1903, physician Niels Ryberg Finsen received the third Nobel Prize awarded in physiology or medicine for demonstrating that exposure to the sun’s ultraviolet (UV) rays cured patients suffering from skin infections of tuberculosis. Not only does UV directly damage bacterial DNA, but a family of bacterial molecules known as porphyrins can form toxic reactive oxygen species when exposed to UV and near-UV radiation, effectively turning them into bactericidal agents. UV and other wavelengths of light have also commonly been used to treat acne, another skin condition caused by bacteria, as well as genetic and autoimmune skin disorders such as psoriasis and loss of pigmentation (vitiligo).

(8) When UV rays hit the skin, they initiate a series of reactions in the body that ultimately result in the synthesis of an active form of vitamin D3, an essential hormone best known for promoting healthy bone formation by regulating blood concentrations of phosphorus and calcium. However, most if not all cells have receptors for vitamin D3, suggesting that metabolites of the vitamin may play a role in myriad physiological processes. Indeed, vitamin D deficiencies, which can be caused by inadequate exposure to sunlight, have been linked to a growing list of disorders, including osteoporosis, certain types of cancers, heart disease, and susceptibility to infection, as well as autoimmune diseases such as multiple sclerosis, arthritis, and type 1 diabetes. (12) The sun has long been known to worsen scarring of smallpox patients, caused by the bursting of pus-filled blisters. By filtering out UV rays and exposing his patients only to the gentler, red end of the light spectrum, Finsen reduced the accumulation of pus in the blisters, and therefore the appearance of pockmarks, initiating what is known as red-light therapy. While this treatment was commonly used throughout history (by draping red cloth over windows, for example, as was done for the son of a 14th-century English king), Philip Hockberger, a physiologist at Northwestern University, says that to this day, “nobody has a clue about how it works.”