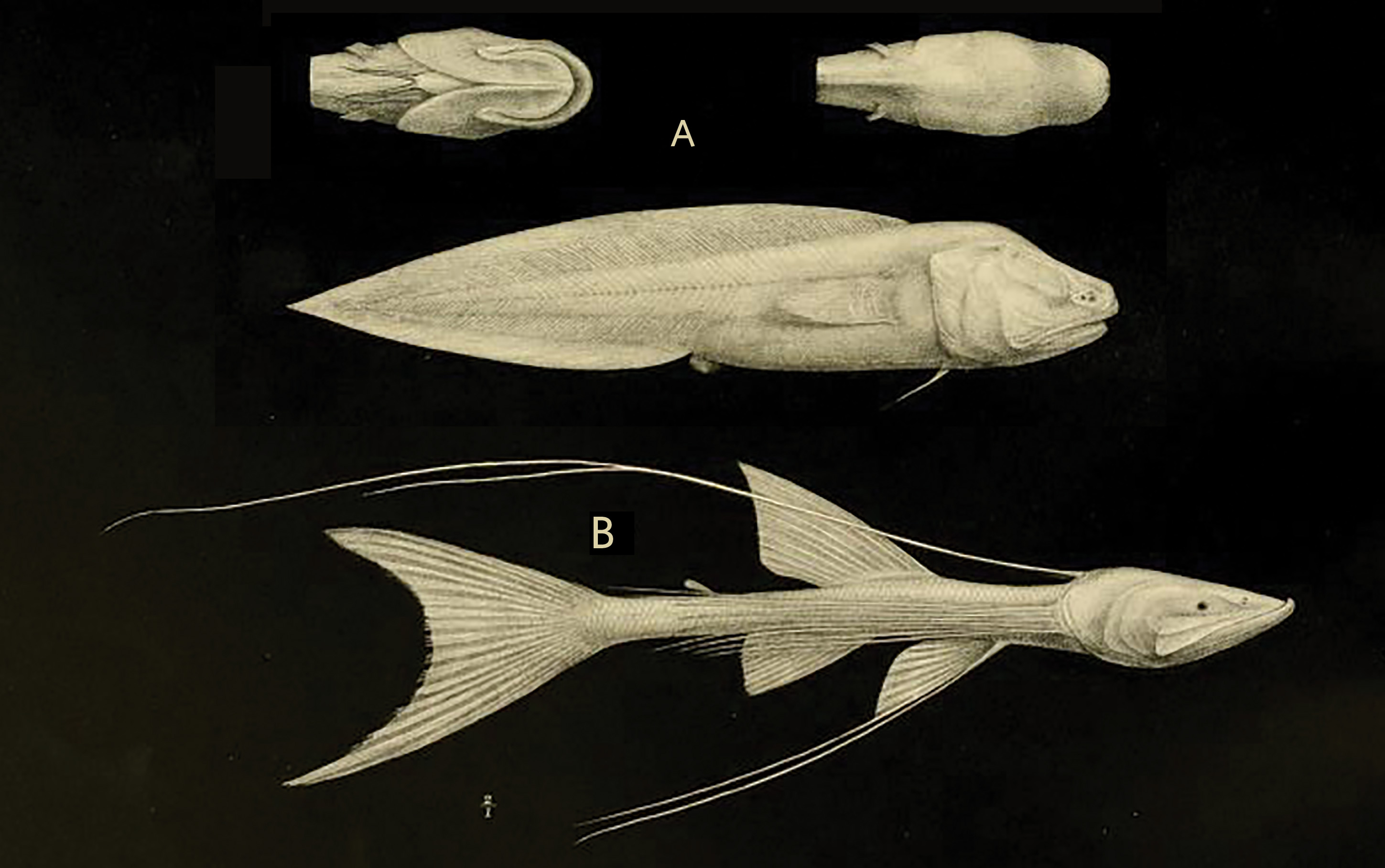 DEEP DIVE: The gelatinous blindfish (Aphyonus gelatinosus , A), netted roughly 1.5 miles below the ocean surface;  Bathypterois longicauda, B, which was found 2.89 miles down
Albert Günther, Report on the Deep-Sea Fishes collected by the H.M.S. Challenger during the years 1873–1876 (London: Her Majesty’s Stationery Office, 1887).

Deep beneath the ocean swells lurk creatures never seen by people—or so some scientists thought in the late 1800s. In On the Origin of Species, Charles Darwin suggested the oceans had remained largely unchanged for millions of years and would contain living fossils of the past, providing proof of his idea of evolution. Others envisioned the deep ocean as a vast wasteland, filled only with extremely primitive life forms, or none at all. To settle the debate, the Royal Society of London launched a daring expedition—the voyage of the HMS Challenger—to map the ocean floor, to...

The voyage may have been “nothing less than a last chance to choose between God and Science,” writes the biogeochemist Richard Corfield in his 2003 book, The Silent Landscape: The Scientific Voyage of HMS Challenger. Work done aboard Challenger revolutionized researchers’ ideas about Earth’s oceans and laid the foundation for the field of oceanography, he tells The Scientist.

Challenger was a small warship that had been converted into a floating laboratory, with nets to scoop up animals at varying depths and winches that unspooled long lines of rope to record the depth of the ocean floor. 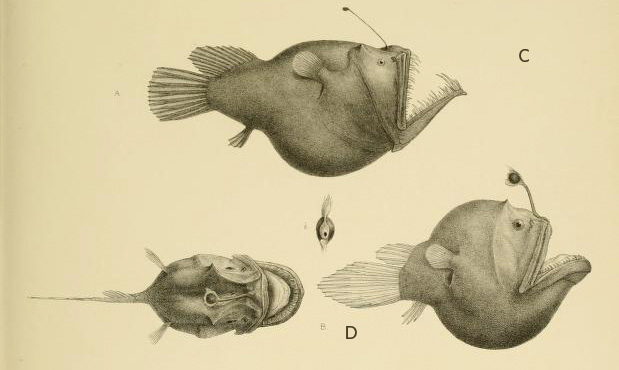 Murray’s abyssal anglerfish (Melanocetus murrayi, C), named after a biologist on the Challenger expedition; and a double angler (Diceratias bispinosus, D)
Albert Günther, Report on the Deep-Sea Fishes collected by the H.M.S. Challenger during the years 1873–1876 (London: Her Majesty’s Stationery Office, 1887).

Captain George Nares, a famous navy surveyor, commanded the 68-meter, wind- and steam-powered ship. Marine zoologist Charles Wyville Thomson, a veteran explorer—whose discovery that ocean temperatures weren’t consistent at different depths suggested the existence of ocean circulation—led the Challenger expedition’s scientific team. The crew left from Portsmouth, England in December 1872 and sailed to the south Atlantic, around Africa’s southern tip at the Cape of Good Hope, across the southern Indian Ocean, and into the Antarctic Circle. It then headed eastward to Australia and New Zealand, the Hawaiian Islands, then south around the southern tip of South America, back into the Atlantic, and finally headed for home in May 1876.

Among Challenger’s greatest discoveries was what was then the deepest spot detected in the ocean—a section of the Marianas Trench that sits more than 8,200 meters below the western Pacific’s surface. (A spot called Challenger Deep now holds the depth title, at 10,994 meters.) Maps of the ocean floor also revealed the first hints of a rise in the middle of the Atlantic Ocean, now named the Mid-Atlantic Ridge. And new species of deep-sea sponges, bizarre anglerfish, and dinoflagellates were discovered. It took researchers roughly two decades to work through all of the data the crew collected, and the analysis occupied 50 volumes.

Many of Challenger’s most important findings, however, couldn’t be interpreted at the time. Decades later, for example, geologists came to realize that the existence of the Mid-Atlantic Ridge provided evidence for plate tectonics, Corfield notes. And, though the voyage produced evidence to support the theory of evolution, its greater effect was to spark a public fascination with the world’s oceans—one that continues today.