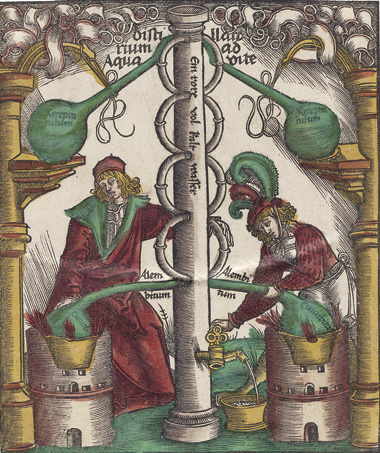 During the Middle Ages, alchemists developed sophisticated ways to tap the medicinal powers of the Earth’s bounty. Depending on the ailment being treated, flowers, herbs, spices, minerals, and animal flesh all potentially held cures, which could be extracted employing methods not unlike those used by modern organic chemists and pharmacologists. Liber de Arte Distillandi, published in present day Strasbourg, France, in 1512, is a compilation of centuries of knowledge intended by its author, German surgeon Hieronymus Brunschwig, to serve as a layman’s guide to the preparation of these natural medicines.

With detailed instructions, ranging from the right times to collect herbs to the exact specifications for constructing distillation equipment, Brunschwig hoped to make medicinal alchemy accessible to “the common people that dwell far from... Medieval alchemists greatly advanced the ancient technique of distillation, which separates components in a mixture by taking advantage of different boiling points. They constructed complex apparatuses to distill what they considered to be the ultimate cures—strong alcoholic concoctions typically infused with herbs and spices, among other things (such as horse dung), and collectively known as aqua vitae, or “water of life.”

The “wound man” is a common motif in medieval medical texts, meant to instruct surgeons on how to deal with a variety of injuries. In Liber de Arte Distillandi, Brunschwig couples the illustration with a list of distillates to be applied to the wounds depicted. The success of these remedies, however, was hit or miss. While some of the associations between specific plant extracts and conditions were based on centuries of tried-and-true observations, others were made using faulty logic. For example, it was thought that if a plant resembles a particular organ, it could be used to treat it.