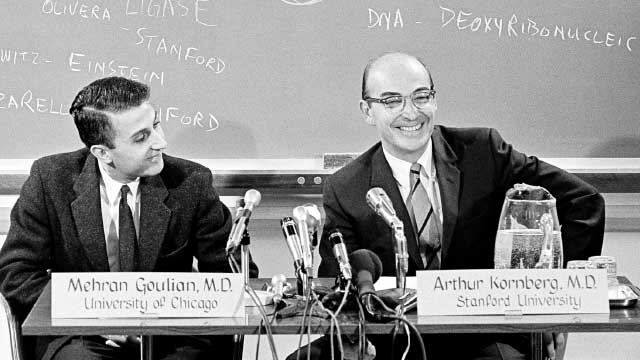 HOLDING COURT: On December 14, 1967, Mehran Goulian and Arthur Kornberg held a press conference at Stanford University to discuss their assembly of a functional, 5,000-nucleotide-long bacteriophage genome. Goulian recalls little of the event, and says modestly, “I assume that I said little or nothing, and I am certain that I was happy for Kornberg to be doing the talking.”CHUCK PAINTER/STANFORD NEWS SERVICE

Arthur Kornberg’s discovery of DNA polymerase in the 1950s was one of the most fundamental contributions to the newly born field of molecular biology, one that allowed him to make strings of nucleotides identical to a template and to show, essentially, how life itself is assembled.

The finding garnered Kornberg a Nobel Prize, shared with Severo Ochoa, in 1959. Yet, as he wrote in a 1989 memoir in The Scientist, there was still a piece missing from the scientific story. “For more than 10...

The missing ingredient, it turned out, was another enzyme: a DNA ligase. In 1967, 37-year-old Mehran Goulian had been experimenting with ligases, which had been recently discovered by other groups, and DNA polymerase in Kornberg’s lab at Stanford University. Using the two enzymes, Goulian found he could convert the single-stranded, circular genome of a bacteriophage, ΦX174, into the double-stranded form, as happens within an infected bacterium, where the phage commandeers its host’s enzymes. Then, with the help of Robert Sinsheimer at Caltech, Goulian and Kornberg showed that the newly synthesized genome could infect E. coli and behave just like the natural virus.

Goulian, Kornberg, and Sinsheimer published their work in PNAS that year, and Kornberg, with Goulian by his side, held a press conference on December 14 to announce their achievement. “He was responding to a widespread concern at that time about the availability of funds for scientific research, especially basic research,” Goulian, now a professor emeritus at the University of California, San Diego, tells The Scientist in an email. “Kornberg hoped that a press conference about this research would increase the level of discussion and appreciation by the American public of accomplishments in government-funded research.”

Indeed, the results garnered publicity, but not in the way Kornberg had anticipated. According to Errol Friedberg’s biography of Kornberg, Emperor of Enzymes, he had wanted to squelch any suggestion that he had created life. Yet, at an event at the Smithsonian Institution that day, President Lyndon Johnson, who had been briefed about the study, made an off-the-cuff remark about it to his audience. “That evening the Kornberg/Goulian experiments were the lead story on the televised news,” Friedberg writes, “which featured the President extemporaneously stating: ‘Some geniuses at Stanford University have created life in the test tube!’”

Questions about manipulating and creating life have not abated in the decades since Goulian and Kornberg synthesized the bacteriophage genome. And their work provided the foundation for much of modern genomic tinkering.

“After so many years of trying, we had finally done it,” Kornberg wrote in The Scientist. “The way was open to create novel DNA and genes by manipulating the building blocks and their templates.”