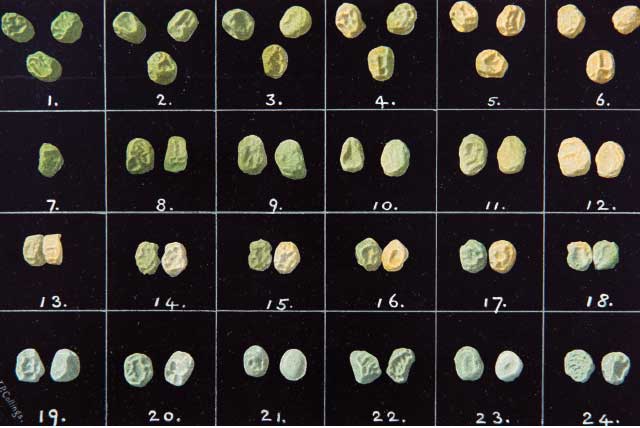 LIKE PEAS IN A POD: This photographic plate from Raphael Weldon’s 1902 article displays the spectrum of pea color variation as a critique of Gregor Mendel’s binary categorization of yellow and green. Images 1–6 display the color range of pea seeds of the variety Telephone as sorted by Weldon after removing their seed coats. Images 7–12 display a color scale from the pea variety Stratagem with coats removed. Images 13–18 show color variations in the two cotyledons of the same pea (Telephone variety). Images 19–24 display peas in their seed coats, which mask any color differences between cotyledons (19–20 are of the Telephone variety; 21, Telegraph; 22, Stratagem; 23, Pride of the Market; and 24, Early Morn).
View larger: JPGUNIVERSITY OF LEEDS

At the turn of the 20th century, Gregor Mendel’s seminal 1866 paper on pea plants and the principles of inheritance resurfaced in the scientific community, thanks...

Weldon had excelled at statistically analyzing variations in wild populations of crabs, shrimps, and snails, and was well-equipped to take a measured look at the Mendel mania occurring among his contemporaries. “[Mendel’s work] was very exciting—even potentially holding the key to a new quantitative science of inheritance,” says Gregory Radick, a science historian and philosopher at the University of Leeds. “But the closer Weldon looked at it, the more skeptical he grew.”

Weldon wrote to commercial pea-plant breeders asking to see samples of their crops for comparison with Mendel’s descriptions. Mendel had focused on traits he designated as binary—seed color was either yellow or green, coats either round or wrinkled. Weldon, however, found much more variety. “Unless you were already con­vinced by Mendel, there was no reason at all to categorize the visible traits in just those two kinds of categories,” says Radick, who detailed Weldon’s work in Science last fall (350:159-60, 2015).

Weldon also took a hard statistical look at Mendel’s data, and the analysis only added to his suspicion. Even if Weldon assumed Mendel’s predictions were accurate, the data were just too good to be true—the equivalent of flipping a coin 100 times and getting exactly 50 heads and 50 tails.

In 1902, Weldon published his critiques in Biometrika, a journal he had cofounded the previous year. According to Radick, Weldon considered Mendel’s data symptomatic of the wider problem with binary categories, which construct a misleading concept of genetic dominance. “Weldon’s confirmed view was that biological science was just on the verge of breaking through to the next level because it was taking variation so seriously,” says Radick. “But it all depended on researchers who were not satisfied with a fictional idealization of complex data—which is, in his mind, what you’re dealing with when you’re dealing with ‘yellow.’ ”

For Weldon, Mendel’s patterns represented special cases where humans had artificially bred out variation in domestic plants and animals. But his paper was met with harsh criticism from a colleague, William Bateson. Former schoolmates, Weldon and Bateson suffered a falling out in the mid-1890s after a series of scientific disagreements. Their rivalry continued through the early 1900s, when Weldon started to write a book detailing his thoughts on Mendel—but Weldon died unexpectedly in 1906 at the age of 46. Bateson continued to champion Mendelian principles and garnered widespread acceptance of rules still taught today in the opening chapters of genetics textbooks.

“Weldon gets remembered, if at all, as the one who misguidedly obstructed the path to Mendelism,” says Radick. “The winners write the history.” But Weldon’s ideas and his unfinished book, stored in the archives at University College London, suggest an alternative path that the early study of genetics might have taken—one that would have more closely approached a modern understanding of DNA’s complexity, embracing variation and unexpected results as crucial to the system rather than exceptions.