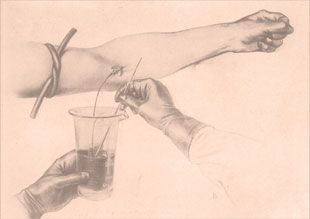 LET IT FLOW: After researchers discovered that sodium citrate could prevent the coagulation of blood for many hours—some claimed for as long as 48 hours, though transfusions were typically performed on the same day as the blood extraction—doctors would put a small amount of the substance in a glass flask and add blood collected directly from the arm of a donor. The blood was then transfused into a patient from the flask. This image was published in a review of the technique by one of its many pioneers, Richard Lewisohn, a surgeon at Mount Sinai Hospital in New York, who helped identify the appropriate dosage of sodium citrate that would keep the blood liquid without being toxic to the recipient. THE BOSTON MEDICAL AND SURGICAL JOURNAL, 190:733-42, 1924.In a dramatic and widely publicized feat in 1908, French surgeon Alexis Carrel, working at the Rockefeller Institute for Medical Research...

“Blood could actually flow from individual to individual and really bring people back from death itself,” says Susan Lederer, a professor of medical history and bioethics at the University of Wisconsin School of Medicine and Public Health.

But the technique required great skill, limiting its implementation to only the most accomplished surgeons, such as transfusion pioneer George Washington Crile, who was one of the first to adapt Carrel’s techniques at the St. Alexis Hospital in Cleveland. Among transfusion practitioners, there was a push to discover a compound that could prevent coagulation enough to support indirect transfusion, without causing excessive bleeding or introducing toxins to the blood.

Various compounds in solution were already used for other anticlotting purposes. Jewish butchers, for instance, used salt solutions to help drain the blood from kosher meat. And scientists had shown as early as the 1890s that sodium citrate could prevent blood clotting in animal experiments. “It was not an obscure compound,” notes William Schneider, a historian of medicine at Indiana University-Purdue University Indianapolis. So it was not surprising when, in 1914 and 1915, three independent groups of researchers, in Argentina, Belgium, and the U.S., each reported that sodium citrate could safely keep human blood from clotting and advocated for its use in medical practice.

They were just in time. On June 28, 1914, Archduke Franz Ferdinand of Austria was gunned down in Sarajevo, and the First World War commenced. As is not uncommon for medical innovation, war turned out to be the perfect testing grounds for the new transfusion techniques. Crile himself traveled to France, where he performed more than 200 blood transfusions on soldiers wounded in battle.

“In wartime you are less concerned with some of the niceties because people are dying around you,” says Schneider. “That’s, of course, the reason they were able to practice transfusion much more—they essentially had ready-made [subjects] that had nothing really to risk.”

“[The war] really did a lot to illustrate its utility,” Lederer agrees. “People returned from the war ready to implement this in a civilian practice in a way they hadn’t been prior to that.”

Sodium citrate also paved the way for the more long-term storage of blood, attempts at which began as early as the end of WWI. “All of current blood transfusion is based on storage,” Schneider says, and in that context, “[the] anticoagulant is even more crucial.”