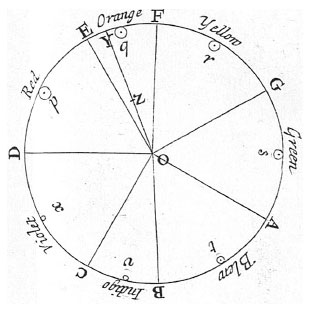 COLOR NOTES: In Newton’s color wheel, in which the colors are arranged clockwise in the order they appear in the rainbow, each “spoke” of the wheel is assigned a letter. These letters correspond to the notes of the musical scale (in this case—the Dorian mode—the scale starts on D with no sharps or flats). Newton devised this color-music analogy because he thought that the color violet was a kind of recurrence of the color red in the same way that musical notes recur octaves apart. He introduced orange and indigo at the points in the scale where half steps occur: between E and F (orange) and B and C (indigo) to complete the octave.ISAAK NEWTON, WIKIMEDIA COMMONSAround 1665, when Isaac Newton first passed white light through a prism and watched it fan out into a rainbow, he identified seven constituent colors—red, orange, yellow, green, blue, indigo, and...

Naming seven colors to correspond to seven notes is “a kind of very strange and interesting thing for him to have done,” says Peter Pesic, physicist, pianist, and author of the 2014 book Music and the Making of Modern Science. “It has no justification in experiment exactly; it just represents something that he’s imposing upon the color spectrum by analogy with music.”

Of his rainbow experiment Newton wrote that he had projected white light through a prism onto a wall and had a friend mark the boundaries between the colors, which Newton then named. In his diagrams, which showed how colors corresponded to notes, Newton introduced two colors—orange and indigo—corresponding to half steps in the octatonic scale. Whether Newton’s friend delineated indigo and orange on the wall or whether Newton added those colors to his diagrams in order to better fit his analogy is unclear, Pesic says. In any case, Newton’s inclusion of those two colors had lasting consequences, Pesic wrote in his book: “For those who came after, Newton’s musical analogy is the source of the widely held opinion that orange and indigo are actually intrinsic in the spectrum, despite the great difficulty (if not impossibility) of distinguishing indigo from blue, or orange from yellow, in spectra.”

Newton persisted with his color theory despite later data he had collected suggesting it was incorrect. When studying what are now called Newton’s rings—as seen, for example, in the rainbow of color in oily puddles—he noted that, according to the relationship between radii of colored rings, the range from red to violet was equivalent not to an octave but to something more like a major sixth. According to Pesic, rather than changing his theory to match the data, Newton came up with an erroneous explanation of how a major sixth was equivalent to an octave.

But as both musicians and physicists know, the two are not equivalent. In physics terminology, an octave is the frequency range from x to 2x, and that premise holds true for musical octaves. If light behaved like music, then photon frequencies of the spectrum would also range from x to 2x, and their wavelengths, inversely proportional to their frequencies, would too. Instead, the wavelengths of visible light range from 400 to 700 nanometers, which, if translated to sound waves, would be approximately equivalent to a major sixth, Pesic says.

Although Newton’s color-music analogy falls apart, his prism experiments showed that white light is actually a mix of different-colored lights, and this work was “a crucial step toward understanding the nature of light more deeply,” Pesic says. And even if you can’t make out indigo in the rainbow, you probably know ROY-G-BIV, which Pesic calls “a conventional expression of (and homage to) Newton’s choice [to name seven colors in analogy to music]—even though almost everyone has forgotten or did not know the odd story of its origin.”