They were said to float atop the sea surface using their shells as gracile vessels, and to lift two of their eight arms as sails that would catch the wind and propel them through the water while the other arms served as oars. This legend, which traces back to Aristotle around 300 BC, describes unique octopuses called argonauts, referencing the sailors of the Argo from Greek mythology. But while argonauts are one of a handful of octopus groups that have left the seafloor to adopt a pelagic lifestyle, they do not, in fact, sail the water’s surface.

From Aristotle’s time on, “the story got more and more embellished,” says Julian Finn, a curator of marine invertebrates at Museums Victoria in Australia and an expert on argonaut taxonomy, biology, and lore. “And then people started drawing them based on the story,” eventually getting to “this argonaut sailing high above the surface.” 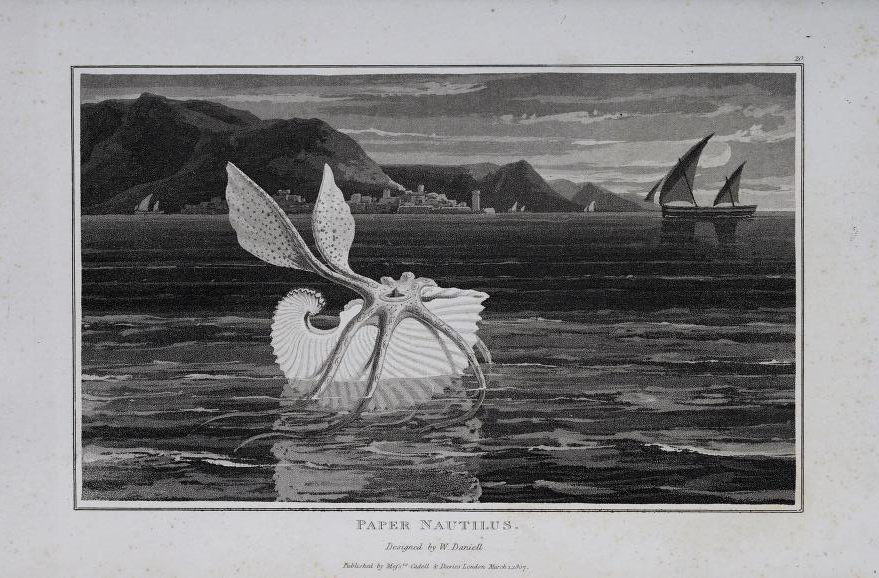 SETTING SAIL: This illustration of Argonauta argo by William Daniell comes from William Wood’s 1807 natural history text Zoography. Wood writes that the bizarre octopus, often called a paper nautilus, “is supplied with eight arms, two of which are furnished at their extremity with an oval membrane that serves for a sail, while the other six, hanging over the sides of the boat, are employed as oars, and occasionally serve to steer by.” This illustration was likely copied from an earlier one, according to Julian Finn of Museums Victoria; both illustrations incorrectly show the octopus’s “sails”—actually membranous webs on its top arms—projecting outward from the arms like flags. In reality, the argonaut’s webs do not have an open end, but are fully surrounded by the animal’s arms, and often stretch out over the sides of their shells.
Biodiversity Heritage Library, Zoography; or, The beauties of nature displayed. In select descriptions from the animal, and vegetable, with additions from the mineral kingdom. SystematicalLY arranged

Myths about argonauts (family Argonautidae) continued to flourish thanks in part to the fact that the octopuses are elusive, fostering misconceptions about their biology and leaving many fundamental questions unanswered for millennia. In the early 19th century, for example, zoologist Georges Cuvier mistook the detached arms of tiny (1- to 2-centimeter-long), shell-less male argonauts for parasitic worms when he found them inside female octopuses. In fact, researchers later learned that when a male encounters a potential mate, it releases an arm loaded with sperm that can crawl into the female’s mantle cavity. In the 1830s, French marine biologist Jeanne Villepreux-Power put to bed an age-old rumor that female argonauts steal their shells from other animals, confirming that they make their own and use it as a brood case for their eggs.

Adding to the aura of mystery around argonauts is the fact that, every so often, thousands or even tens of thousands of them wash up on a beach. Some people had speculated that air gets trapped in the animals’ shells and causes them to float and wash ashore, but no one had ever documented the argonauts’ behavior in their natural environment to find out whether air bubbles in shells present an issue.

So in December 2005 and January 2006, Finn, then a PhD student, went with fishermen off Shimane Peninsula in the Sea of Japan each morning in the hopes that they would see a female greater argonaut (Argonauta argo). Before long, Finn had scooped up a total of three female argonauts. He transported them to a nearby harbor, where he would remove all air from the shell of one of the argonauts before he released it just above the seafloor and observed its behavior.

“Straight away, it floundered around and you could see that it just didn’t have stability underwater,” Finn says. But then the argonaut would jet up to the surface and rock back and forth with its shell sticking out of the water to capture air. The octopus would use one arm to contain the air in the shell before it dove to a depth where the animal became neutrally buoyant (Proc Roy Soc B, 277:2967–71, 2010). “And then it just shot off. . . . It went from being this animal that was struggling underwater to being a perfect submarine—it was so graceful.”

So air in an argonaut’s shell is probably not what leads to the animal’s untimely demise, Finn reasons. The cause of the mass argonaut strandings, along with much else about these storied creatures, remains a mystery.