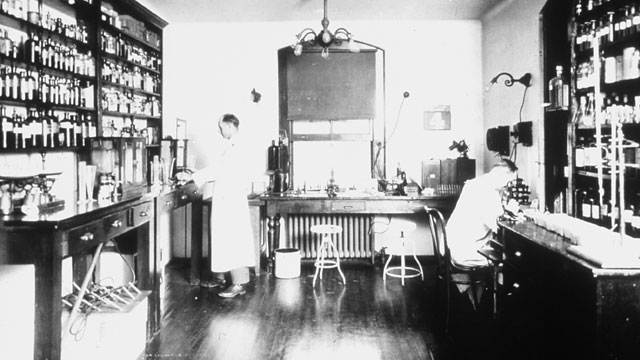 As epidemics swept across the United States in the 19th century, the US government recognized the pressing need for a national lab dedicated to the study of infectious disease. In 1887, the government set its sights on a small lab located in the Marine Hospital on Staten Island, New York. Its sole member, 27-year-old Joseph James Kinyoun, belonged to a new generation of scientists and physicians who were beginning to understand how microscopic organisms underlay the terrible killers of their day, such as smallpox, yellow fever, and Asiatic cholera. That one-room lab on Staten Island, which Kinyoun originally called “the Laboratory of Hygiene,” ultimately evolved into the 27 institutes and centers that now make up the National Institutes of Health.

Kinyoun’s first order of business was to collect blood and stool samples from the sick...

Although microorganisms had been visible to the human eye for nearly 400 years thanks to the invention of microscopes in the 1600s, a definitive connection between bacteria and infectious disease wasn’t made until the late 19th century. Instead, filth and poverty were blamed for deadly epidemics, and treatment and prevention strategies were aimed at improving sanitation and welfare. During his time at the Hygienic Laboratory (as it was later called), Kinyoun sailed to Europe for six months to train with the great bacteriologists of his day, including Robert Koch and Louis Pasteur, bringing back laboratory techniques, recipes for effective treatments, and a passionate vision for reforming US health practices, says author and historian Joseph Houts, Kinyoun’s great-grandson. “It was in great part due to him that the ‘germ theory’ made its way back to the United States,” Houts adds.

Kinyoun’s tenure as the first director of the NIH lasted 12 years, but his role in shaping how the federal government dealt with the country’s health continued well after his retirement. Following several deaths due to contaminated and shoddily produced vaccines, he pushed hard for the implementation of universal standards for the production of medicines. He was also acutely aware of the need to monitor infectious diseases across the country, as well as the need for an official body that could enforce drastic measures, like quarantines during deadly epidemics. Such efforts, Houts says, eventually led to the creation of federal agencies such as the US Food and Drug Administration and the Centers for Disease Control and Prevention.