ABOVE: FACE OFF: Charles R. Knight completed this mural of a Tyrannosaurus rex and a Triceratops in 1927. The painting later inspired an epic battle sequence between the two beasts in the 1966 adventure film One Million Years B.C. (See video below.)
© THE FIELD MUSEUM, PHOTOGRAPHER RON TESTA

American artist Charles R. Knight produced some of the most iconic paintings of prehistoric life to date. Several major natural history museums in the US have featured Knight’s murals: detailed, colorful, and dynamic portrayals of dinosaurs and other ancient flora and fauna. Knight’s work also seeped into popular culture, influencing depictions of dinosaurs into the present day.

“He really had a huge impact on how the public perceived paleontology,” says Peter Makovicky, a curator at the Field Museum in Chicago, “because most people are interested in some sort of educated estimate of what these things would have looked like in life—bones are inspiring, but they are not quite enough.”

Knight was born with severe nearsightedness in Brooklyn, New York, in 1874. When he was six, he suffered an injury to his right eye that further impaired his sight, and he was legally blind for most of his adult life. Still, Knight grew up sketching animals, drawing inspiration from the many museums and zoos in New York City. He enrolled at the Metropolitan Art School, housed in the basement of the Metropolitan Museum of Art, at age 12. Knight would later compensate for his poor vision by painting with his “nose pressed up against the [canvases],” Makovicky says.

In his 2012 book, Charles R. Knight: The Artist Who Saw Through Time, science historian Richard Milner writes that in Knight’s early 20s, he was a freelance illustrator for children’s books and magazines and spent his spare time haunting the halls of the American Museum of Natural History (AMNH) in Manhattan, carefully examining and drawing the carcasses of taxidermied animals. His work caught the attention of the staff, and museum paleontologist Jacob Wortman eventually hired the artist to paint the Entelodon, a prehistoric pig, based on fossilized bones. The scientist was pleased with the results and commissioned Knight to produce several more pieces of art for the museum. Later, Knight met Henry Fairfield Osborn, another AMNH paleontologist with whom he worked closely for much of his career.

Prior to Knight’s work, most dinosaurs had been portrayed as dull, slow-moving creatures. Leaping Laelaps, an iconic piece Knight produced for the AMNH, was one of the first illustrations to depict the ancient beasts in action—in this case, in combat with each other.

In addition to his work for the AMNH, Knight produced numerous pieces depicting prehistoric life for the Field Museum in Chicago and contributed regularly to National Geographic, Popular Science, and other magazines. He painted his final mural in 1951.

Although Knight worked closely with paleontologists to make his pieces as accurate as possible, some of his representations have not stood the test of time. For example, scientists now know that rather than simply sharing a common ancestor, birds evolved from small, feathered dinosaurs—but the creatures in Knight’s paintings are mostly lizard-like and lack plumage. Even so, the artist continues to exert a strong influence on the popular vision of prehistoric life.

“Not since the Lord himself showed his stuff to Ezekiel in the valley of dry bones had anyone shown such grace and skill in the reconstruction of animals from disarticulated skeletons,” the late paleontologist Stephen Jay Gould wrote in his 1989 book, Wonderful Life. Knight, he continued, “painted all the canonical figures of dinosaurs that fire our fear and imagination to this day.” 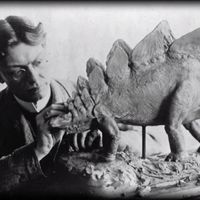 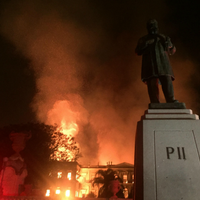