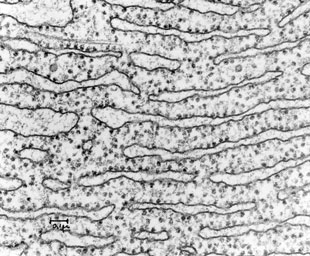 ROUGH ER: In 1966, a decade after first describing granules within cells that would come to be known as ribosomes, George Palade generated this transmission electron micrograph of the guinea pig pancreas illustrating the endoplasmic reticulum studded with ribosomes. COURTESY OF YALE UNIVERSITY SCHOOL OF MEDICINEAs biologist James Rothman took the stage in Stockholm last year to accept a Nobel Prize for his work on vesicle transport, he gave credit to the man who used to occupy his office at Yale University. “Certainly the story of the work that led to my contributions begins with George Palade,” Rothman said. A grandfather of the field of cell biology and the founder of Rothman’s department, Palade discovered a process of intracellular transport—the movement of proteins from the endoplasmic reticulum (ER) to the Golgi apparatus and then into secretory vesicles.

In 1974, Palade himself took the stage to deliver his own...

During this time, Palade and many of his colleagues were particularly interested in the pancreatic acinar cell, a veritable factory of protein synthesis and secretion. With advances in thin sectioning, Palade was able to image the endoplasmic reticulum (ER)—an organelle whose folds were studded with bumps resembling peppercorns. “Its pictures had for me the effect of the song of a mermaid: irresistible and half transparent,” he later recalled.

In 1955, Palade published striking images of acinar cells in the rat pancreas and reported for the first time the presence of granules dotting the outer surface of the ER. “The relationship between the membrane of the endoplasmic reticulum and the small granules deserves special consideration,” Palade wrote in the Journal of Biophysical and Biochemical Cytology paper that reported the findings. Initially called Palade particles, the granules were later renamed ribosomes, and are now well known as the sites of protein synthesis.

The identification of ribosomes “was the highlight of [Palade’s] career, recognized by the Nobel committee as such,” says James Jamieson, a long-time colleague of Palade and a professor at Yale University. “Basically, it was the beginning of the integration of biochemistry and morphology, which defines cell biology.”

Jamieson and Palade later worked out that proteins are transported inside little vesicles to the Golgi and then to secretory granules. Palade also made major contributions to understanding membrane biology. “For a scientist, it is a unique experience to live through a period in which his field of endeavor comes to bloom,” Palade said during his Nobel banquet speech, “to be witness to those rare moments when the dawn of understanding finally descends upon what appeared to be confusion only a while ago—to listen to the sound of darkness crumbling.”