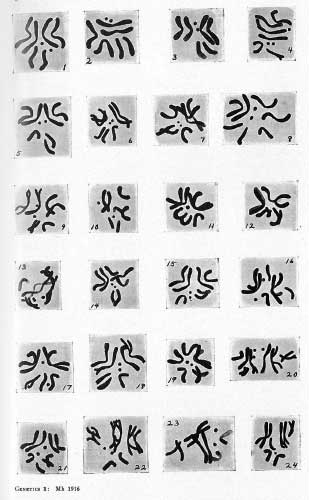 MAKING EXCEPTIONS: In the drawings illustrating one of his 1916 Genetics articles, Calvin Bridges compared the karyotypes of wild-type fruit flies (1–4) with those expressing traits contrary to the normal pattern of sex-linked inheritance (5–24). Normal flies have four pairs of chromosomes, including a pair of X chromosomes for females (1–3) and one X and one Y (hook-shape chromosome) for males (4; the extra spot here was thought to be of no significance). Bridges found that females expressing their mothers’ recessive X-linked traits always had an XXY karyotype as a result of nondisjunction during meiosis (5–19). Figures 20–24 depict the XXYY karyotype of a female produced by mating an XXY female and an XYY male, the parents themselves offspring of an XXY female.
View at full size: PDFC.B. BRIDGES, “NON-DISJUNCTION AS PROOF OF THE CHROMOSOME THEORY OF HEREDITY(concluded),” GENETICS, 1:107-63, 1916.In an era of whole-genome sequencing, epigenetic...

In 1910, Bridges began working in the famous Fly Room at Columbia University as a member of Thomas Hunt Morgan’s lab. Morgan’s group had already described sex-linked inheritance: male fruit flies, which receive just one X chromosome from their mothers, express any recessive genes on that chromosome, such as an unusual eye color. Females, on the other hand, receive an X chromosome from each parent, so recessive X-linked traits emerge only among homozygotes—at least, that’s what happens most of the time. Bridges encountered rare errors in this pattern. About 1 in every 1,600 heterozygotic females expressed an unusual eye color or some other recessive X-linked trait borne by her mother, suggesting she had not received an X chromosome from her father. And an equal number of males expressed X-linked traits only their fathers displayed.

Bridges took note of these odd flies and proposed that during meiosis, some chromosomes failed to separate, causing one haploid gamete to receive two sex chromosomes and one to receive none. He called this distribution of chromosomes nondisjunction.

The rarity of this event made it difficult for Bridges to test his theory. So he bred his unusual females with normal males to produce atypical females at a much higher rate. He dissected the offspring’s ovaries, and with just the aid of a light microscope, examined oocytes undergoing meiosis. As predicted, he found that the females always had two X chromosomes and one Y. He concluded that during fertilization after nondisjunction, if an XX egg receives an X chromosome from the father, the egg is inviable, while a Y chromosome results in XXY females. For eggs with no X chromosome, only those that receive the father’s X chromosome survive, and Bridges found that those develop into sterile males. His results, published in two articles in the inaugural issue of Genetics in 1916 (1:1-52 and 107-63), also confirmed that in Drosophila, sex is determined by the number of X chromosomes; one X chromosome makes a male and two make a female.

In addition to demonstrating that misbehaving chromosomes were behind the unusually inherited traits, says Barry Ganetzky, a fly geneticist and emeritus professor at the University of Wisconsin–Madison, Bridges was also the first to describe an error in meiosis—the type of error that is the most frequent cause of birth defects in humans (see “A Scrambled Mess”). Ganetzky adds that he is impressed Bridges even took note of a 1-in-1,600 aberration. He suspects most scientists would disregard the chance event rather than divert resources from a planned project. “I hate to admit that’s probably what I would have done.”