Most know Rachel Carson for her work on the dangers of chemical pollutants, but the writer’s earlier prose took readers on a tour of a mysterious underwater world.

The sea, Rachel Carson once wrote, is the “great mother of life.” Most know Carson for Silent Spring, an environmental manifesto that accused the chemical industry of spreading disinformation on pesticides. The book, published in 1962, contributed to the initiation of a federal ban on the use of the synthetic organic compound DDT, and to the creation of the US Environmental Protection Agency. But long before Carson’s carefully crafted prose helped to push the environmental movement forward, she introduced readers to the wonders of the sea. 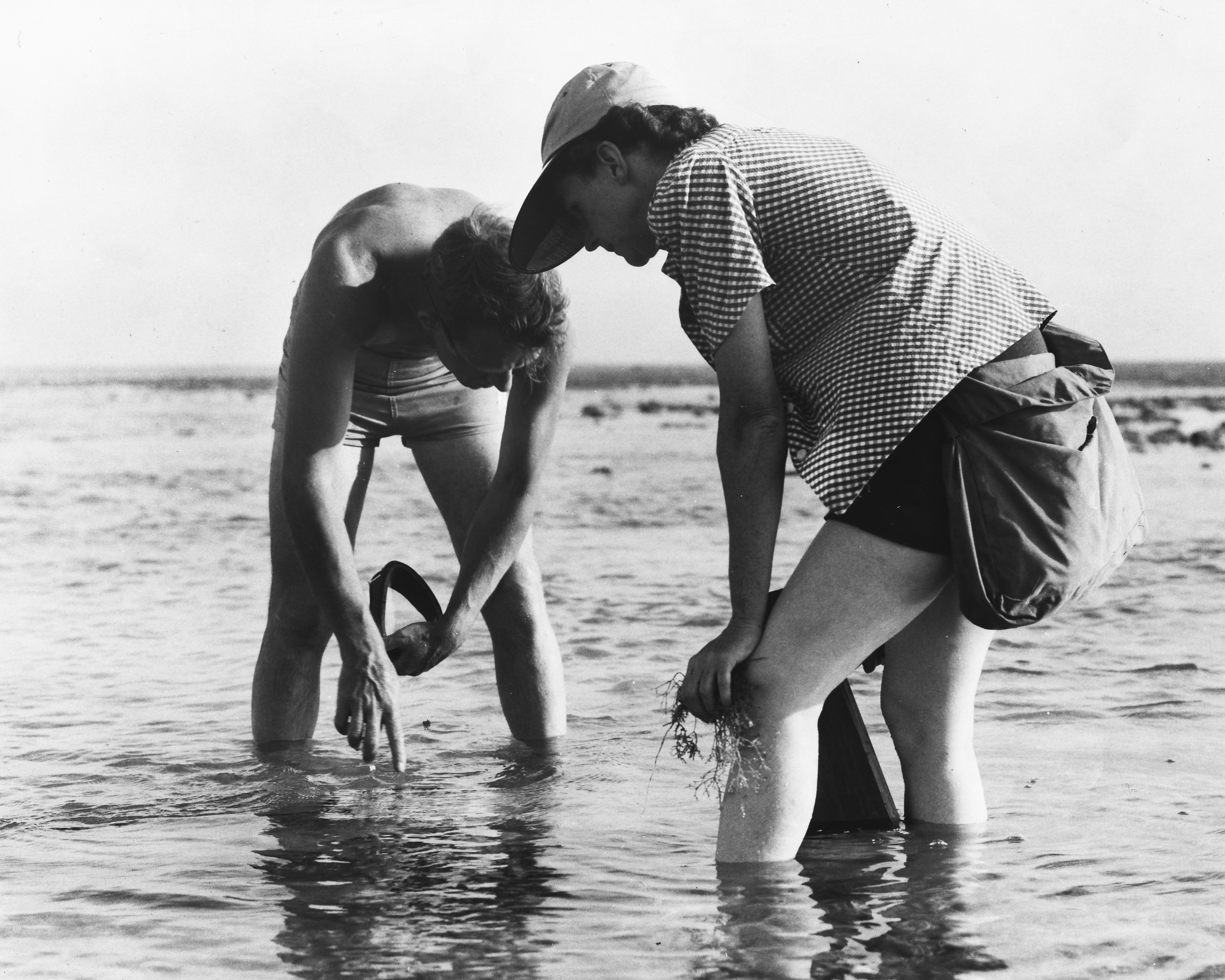 TIDAL PROSPECTING: Rachel Carson and Bob Hines, an artist who illustrated The Edge of the Sea, collect specimens of life from the surf in the Florida Keys in 1955.
Courtesy Rachel Carson Council, Rex Gary Schmidt

To write Under the Sea-Wind, her first book, Carson lay on the beaches of Beaufort,...

For him, Musil says, the enduring appeal of Carson’s writing comes from her insight that “if you can’t identify with something, somebody, a species, or a people who are different than yourself, you’re inclined to destroy it.”

This ethic of environmental empathy was first instilled in Carson as she grew up outside of Pittsburgh, learning from her mother to listen to and identify the songs of birds and appreciate the wonder of the natural world. Carson made her first foray into writing at age eight with a story about two wrens searching for a house. She later enrolled at Pennsylvania College for Women, now Chatham University, to study English. A biology course taught by Mary Scott Skinker led Carson to a summer research position at the Woods Hole Marine Biological Laboratory, where she combed the shore during the day, and at night peered into the water to watch what came to life under the moonlight.

Carson went on study zoology at Johns Hopkins University, where she wrote a thesis on the development of a type of tissue that helps days-old fish embryos excrete waste, completing her master’s degree in 1932. She started her PhD in marine biology at Hopkins but left the program to take a job at the Washington, DC, office of the Bureau of Fisheries, now the US Fish and Wildlife Service (FWS), to support herself and her family during the Depression. She continued to write, first selling articles to The Baltimore Sun, and eventually submitting an essay to The Atlantic. After it was published, she began using her evenings to work on Under the Sea-Wind.

Published in November of 1941, the book was critically acclaimed, but because of the outbreak of World War II, it didn’t sell well. Drawing on her fish embryo research and her experience as an aquatic biologist and science writer at the FWS, Carson pitched a story on the detrimental effects of pesticides to Reader’s Digest, but it wasn’t accepted. Undeterred, she started on her second book, The Sea Around Us, which became an instant best seller, winning the National Book Award for nonfiction writing in 1952. Subsequently, Carson’s first book was republished and also became a best seller, as did the next book she wrote, The Edge of the Sea.

Ultimately, Carson did get her warnings about pesticides into print. And Musil says that the success of her first three books is part of the reason that Silent Spring had the impact that it did.