Following the 1859 publication of Charles Darwin’s On the Origin of Species, naturalists worldwide began looking at life in new ways, steering away from rank-based Linnaean classification and toward a version of taxonomy that better reflected species’ relatedness and their environmental relationships. The German biologist Ernst Haeckel coined the term “ecology” in 1866 to describe this burgeoning field.

Decades later, in the 1930s, American marine biologist Edward “Ed” Ricketts brought yet another new perspective to ecology, focusing not only on naming organisms, but on studying each habitat holistically to understand how each species occupied a unique niche. His work centered on the dynamic and diverse coast of California’s Monterey Bay, which changed dramatically each hour with the tides.

“Ricketts’s work was groundbreaking largely because it moved beyond classic taxonomy and was truly environment-based ecology,” explains Katie Rodger, a lecturer at the University of California, Davis, who has written extensively on the scientist’s life and edited collections of his writings.

To track the roles of organisms within their environments, Ricketts developed a complex cataloging system that integrated collected specimens, scientific literature, and correspondence and expedition notes from other biologists, among other sources of information. The specimens and data he collected were housed in the Pacific Biological Laboratories, a company Ricketts started to supply specimens to schools, museums, and research facilities.

At the heart of the system were detailed 4 x 6–inch index cards that Ricketts used to condense information into an easily referenced format. The fronts of the cards included an organism’s basic information—its name, physical description, position in the intertidal, and geographic region, for example—while the reverse side provided space for references to supplementary materials, collected specimens, and the organism’s suspected niche. A system of colors and notches allowed Ricketts to sort the cards by geography, taxonomy, or morphology as needed. 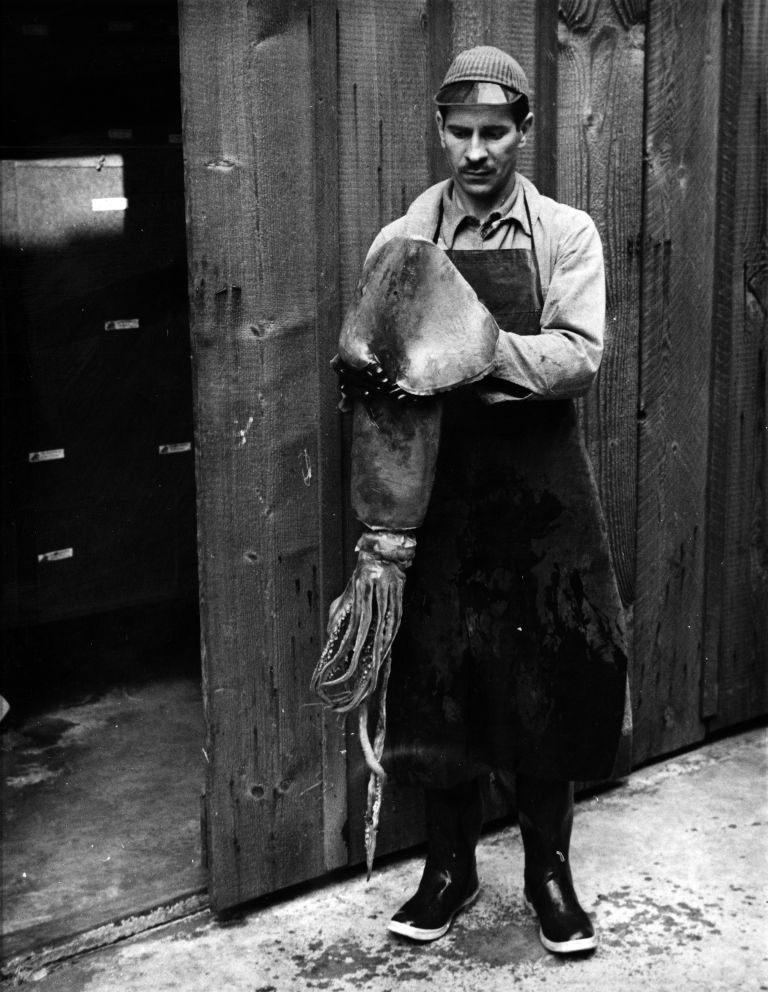 LIFE INTERCONNECTED: Though many ecologists of the day were focused on cataloguing organisms by their taxonomy and nomenclature, Ed Ricketts—seen here holding a Humboldt Squid (Dosidicus gigas)—also compiled other types of information to better understand how each species comes to occupy a unique ecological niche.
Monterey Public Library, California History Room Archives

In 1939, Ricketts demonstrated the utility of his system when he published Between Pacific Tides, the first guide to classify organisms by their habitat and link their presence to specific features of the environment, such as whether the coastline was rocky or sandy. This organization of organisms based on their location “was one of, if not the first comprehensive surveys of the region,” Rodger says. Ricketts himself wrote in an expedition notebook that he hoped to eventually catalog “every marine shore animal recorded in the area from Bering Sea to Ecuador” to a depth of 30 fathoms (roughly 50 meters).

Beyond his lasting impact on the field of ecology, Ricketts has also been immortalized in American literature through his friendship with novelist John Steinbeck. Ricketts was reflected in several characters in Steinbeck’s writing, and the pair also collaborated on The Log from the Sea of Cortez, which documented their six-week scientific tour of the Gulf of California in 1940.

When Steinbeck re-released the book in 1951, three years after Ricketts’s death at age 50 when his stalled car was struck by a train, it included a new tribute. Of his close friend, Steinbeck recalled a man who was indifferent to most everything conventional—from his appearance to his punctuality—but who completed his scientific work with “antlike methodicalness.”