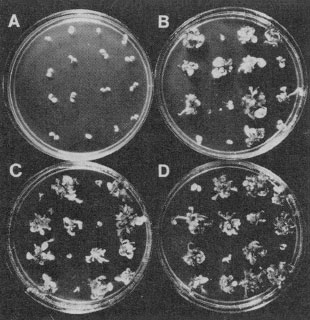 TRANSFORMING PLANT BIOLOGY: In 1986, three years after producing transgenic petunia and tobacco plants using Agrobacterium, a team from Monsanto developed a similar protocol to transform Arabidopsis. The researchers inserted a gene into the plant that would confer resistance to the antibiotic hygromycin. They then grew plants on medium that selects for hygromycin resistance. Wild-type plants (A) grew poorly, while most of the progeny of transgenic plants thrived (B-D).SCIENCE, 234:464-66, 1986. REPRINTED WITH PERMISSION FROM AAAS
In the fall of 1982, Robert Horsch, a tissue-culture expert hired by Monsanto a year earlier, came bursting out of the lab’s plant-growing room. Clutching a handful of experimental specimens, Horsch ran up and down the hallway yelling, “It worked! It worked! It worked!” Robb Fraley, Horsch’s colleague who is now Monsanto’s chief technology officer, recalls that special day. “I don’t think anyone was confused about what was happening. It... 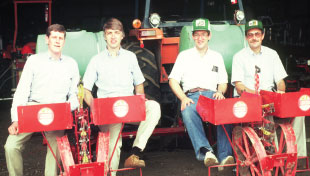 From left to right: Monsanto collaborators Rogers, Roger Beachy, Horsch, and Fraley, at the first biotech crop test plot, 1987COURTESY OF MONSANTOWhat had worked was a transformation protocol that Fraley, Horsch, and their colleagues had developed to insert a foreign gene into petunia and tobacco plants using Agrobacterium tumefaciens (PNAS, 80:4803-07, 1983). Their success in developing what is still a go-to method for genetic engineering marked the beginning of a new era in agriculture and basic plant biology.

At the time, Monsanto was not known for any molecular-biology prowess, but rather for its agricultural chemical manufacturing. In 1981, the firm put together a small biotechnology dream team tasked with figuring out how to put genes into plants, with Fraley as the DNA-delivery expert, Horsch leading the way in tissue culture, and Steve Rogers pioneering recombinant DNA.

“What made it challenging and exciting and a scientific first was, if you think about it, we not only had to develop the method for getting a gene into a plant cell, but the ability to detect that gene and determine if it had been passed on into the tissues of the plant that allowed it to regenerate and create new plants and pass those seeds on to the next generation,” says Fraley. “For it to work, we had to solve all those problems and solve them simultaneously.”

Fraley’s group was among several that had been working toward genetically engineering plants. A banner year for the field, 1983 saw Mary-Dell Chilton’s team at Washington University in St. Louis, Marc van Montagu’s group at Ghent University in Belgium, and Fraley’s Monsanto crew each publish significant advances in quick succession. (These three scientists ended up sharing the 2013 World Food Prize for their accomplishments.)

The next step for the Monsanto group was to move beyond the Solanaceae family of plants. Horsch, now head of the agricultural research and development team at the Gates Foundation, recalls that Arabidopsis thaliana was looking like it would become a facile model organism for plant science. So when Alan Lloyd, a greenhouse manager at Monsanto, came to Horsch asking for a project, he suggested that Lloyd work on applying the transformation technique to the little plant.

“If a greenhouse manager could figure out how to do this, I figured that was a really good indication that a lot of people could do this,” says Horsch. By testing various tissue culture conditions, selectable markers, and Agrobacterium strains, Lloyd succeeded. In 1986, the team published the protocol (Science, 234:464-66), along with the bold and prescient statement that “demonstrations of the feasibility of these approaches to the identification, isolation, and analysis of specific plant genes will guarantee the position of A. thaliana as ‘the Escherichia coli of the plant kingdom.’” Indeed.