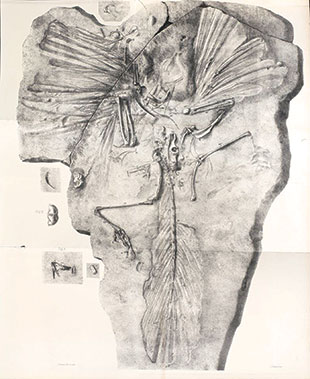 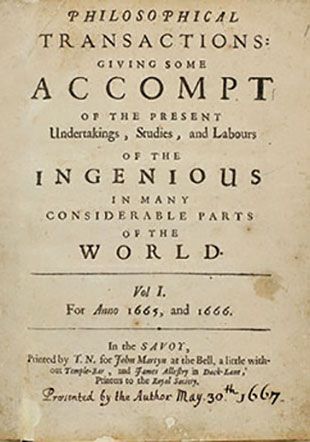 INCORPORATING ILLUSTRATION: Over the course of the 19th century, Philosophical Transactions began commissioning more illustrations to accompany the manuscripts in its pages (frontispiece to the first issue above). As soon as a manuscript was accepted for publication, the editors would send off instructions to an engraver, who would detail the request onto metal plates. The plate above is taken from a famous 1863 Philosophical Transactions paper on a fossil Archaeopteryx, an archetypal specimen of Darwinian evolution that helped paleontologists connect birds to their dinosaur ancestors. The paper’s author, Royal Society Fellow Richard Owen, was a frequent contributor, publishing 50 papers on comparative anatomy in the journal throughout his life.ROYAL SOCIETY'S COLLECTIONS; HENRY OLDENBURG/WIKIMEDIA COMMONSAs a founding fellow and the first Secretary of the Royal Society in London, established in 1660, Henry Oldenburg wrote and received a lot of letters. One day, he decided he would publish some of...

Philosophical Transactions published its first issue in March 1665. Although it was scarcely profitable—and wouldn’t be for nearly 300 years—it was successful, printing 1,000 copies every month in its early days. This year, with a subscription base of more than 4,000 academic institutions worldwide and around 5 million annual article downloads, the publication celebrates its 350th birthday as the oldest surviving scholarly journal.

For the first nine decades of its existence, Philosophical Transactions continued to publish in the vein of Oldenburg’s vision—as an accessible and informative scholarly journal that shared communications from across the continent. Then in 1752, the Royal Society took it over, and the periodical became dedicated to publishing research papers presented at meetings of the society. But it didn’t take on the color of the science journals we read today until the following century, when, in 1832, in response to accusations that the publication was ineffective at promoting the best research, the Royal Society began to institute a series of processes that would eventually evolve into a modern peer-review system.

The use of independent and, later, written reports to review scientific communications was “a totally new thing,” says Aileen Fyfe, a historian at Scotland’s University of St. Andrews who specializes in the history of science communication and publishing. “As far as we can tell, [the Royal Society members were] the first people to do it systematically and routinely.” By the end of the 19th century, manuscripts were sent to two reviewers (always Royal Society fellows), and based on their recommendations, papers for publication were selected by a committee akin to a modern-day editorial board.

Interestingly, this shift toward a peer-review system, which was ultimately adopted by the rest of the scientific publishing community, paralleled a change in how researchers themselves were evaluated. The early reputation of regular Philosophical Transactions author and active Royal Society member Richard Owen (1804–1892), for example, “was based less on his publications and far more on his practical skills as a comparative anatomist and museum curator—and on his assiduously cultivated social networks,” Fyfe says. But by the end of Owen’s career, things had changed. “For the generations after Owen, it was the papers you published—in journals like the Philosophical Transactions—that were going to determine whether you got that professorship, that prize, or, later, that grant.”