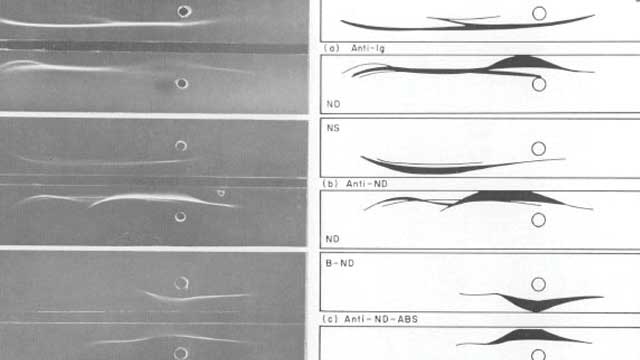 IN PURSUIT OF IgE: University of Uppsala researchers Gunnar Johansson and Hans Bennich characterized a protein from a myeloma patient using electrophoresis (drawings to the right reflect results in corresponding gels). The duo saw massive amounts of immunoglobulin (a) in the patient’s serum (ND), eclipsing that in normal serum (NS). Antibodies raised against the ND protein produced markedly similar patterns (b), suggesting ND was an immunoglobulin—a notion supported by removing ND light chains before running the gel (c). The remaining heavy chains belonged to IgE.
See full image: PDFReprinted from S.G.O. Johansson, H. Bennich, “Immunological studies of an atypical (myeloma) immunoglobulin,” Immunology, 13:381-94, 1967 with permission from Wiley

In the early 1960s, Kimishige Ishizaka, then an immunologist at the Children’s Asthma Research Institute and Hospital in Denver, volunteered himself as a human pincushion. In pursuit of understanding what was then a mysterious protein called reagin, Ishizaka had...

Researchers had been collecting clues about reagin—a molecule implicated in hay fever, allergic asthma, and other allergic conditions—decades before Ishizaka’s self-experimentation. Inspired by a 1919 report of a new horse allergy in a patient who received blood from a horse-sensitive donor, German researcher Carl Prausnitz injected serum from a fish-allergic colleague, Heinz Küstner, into his own arm in 1921.

The following day, Prausnitz pumped fish extract into the same site and the allergy emerged, a bright-red rash on his arm. With that, Prausnitz launched the Prausnitz-Küstner (P-K) test, one of several key tools ultimately used to discover IgE.

But before IgE was recognized, Ishizaka, with his wife and collaborator Teruko Ishizaka and colleague Margaret Hornbrook, took a detour. In 1963, they reported that reagin was a new form of immunoglobulin A (IgA). Soon after, they had doubts. For one thing, researchers had trouble reproducing the results. The University of Birmingham’s Dennis Stanworth later wrote that he also “hotly contested” the idea that reagin was IgA when the Ishizakas visited his lab in the 1960s—a move he believes “encouraged them to look again at this question.”

In 1966, the Ishizakas and Hornbrook used the P-K test to show persistent ragweed sensitivity in serum from affected individuals, even after adding antibodies to slurp up IgA (J Immunol, 97:75-85). The rash could be avoided by tossing in antibodies raised against reagin in rabbits, though, as the experiment on Ishizaka’s back had revealed.

Producing antibodies to reagin “was actually the key,” suggests Toshiaki Kawakami, an immunology researcher at the La Jolla Institute for Allergy and Immunology, where Kimishige Ishizaka was the founding scientific director and former president. “Using that antibody, they could identify that the factor was a new molecule because of the size and because of the activity,” says Kawakami.

The Ishizakas were not alone in their pursuit of reagin. At the University of Uppsala in Sweden, Gunnar Johansson and Hans Bennich were intently unraveling crucial physical and chemical properties of IgND, a protein found at sky-high levels in blood from an individual (initials N.D.) with an unusual form of myeloma. The duo, along with Stanworth and John Humphrey in the U.K., went on to show (in Humphrey’s skin) that, when delivered first, IgND blocked reagin’s activity, presumably because IgND was already interacting with reagin’s targets (The Lancet, 290:330-32, 1967).

Suspecting they were working on the same molecule, the Johansson- and Ishizaka-led teams swapped reagents and confirmed reagin and IgND were the same protein and a new form of immunoglobulin. In 1968 they agreed upon naming it IgE (Immunology, 15:323-24).