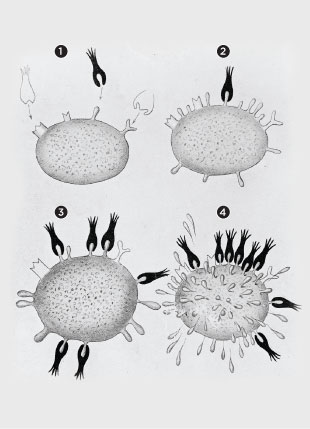 RELEASE THE RECEPTORS: According to Ehrlich’s side-chain theory —depicted here in a diagram used to illustrate his lecture to the Royal Society of London in 1900—immune cells were dotted with a vast array of receptors (1), each specific to a particular substance (2). When a toxin interacted with the relevant receptor (3), the cell would be activated and would react by producing more receptors, which would then be released into the bloodstream as antibodies to neutralize the toxin (4). The theory earned Ehrlich a Nobel prize, but was later discredited and largely forgotten by immunologists.WELLCOME LIBRARY, LONDONPerhaps as a respite from his struggles with literary subjects at school, during the 1860s or early 1870s a teenage Paul Ehrlich visited the lab of his cousin Karl Weigert, a pathologist at Breslau University in what is now Wroclaw, Poland. Weigert showed Ehrlich how to stain...

Ehrlich continued to experiment with dyes after he enrolled at Breslau University in 1872. As a student working under the anatomist Wilhelm von Waldeyer, his bench was crowded with dyes, and often “his fingers and occasionally his face were colorfully smudged,” wrote Arthur Silverstein in his 2002 book, Paul Ehrlich’s Receptor Immunology: The Magnificent Obsession. Ehrlich proved his proficiency in developing new dyes by discovering a novel type of immune cell called the mast cell in 1878. Four years later he also helped to improve Robert Koch’s stain for a rod-shaped bacillus that Koch had identified as the causative agent for tuberculosis, now called Mycobacterium tuberculosis.

By that time Ehrlich was convinced that “a definite chemical character of the cell,” as he wrote in his 1878 doctoral dissertation, endowed different cell types with the ability to accept or exclude dyes. “This revelation, it ruled everything else he did for the rest of his life,” says Silverstein. When Ehrlich began working on an antibody-rich antiserum for the diphtheria toxin in 1893, the research solidified his belief that cells had chemically distinct receptors, or “side-chains,” which they used with lock-and-key specificity to absorb a dye or release antibodies to neutralize toxins.

He published the first part of his side-chain theory in 1897, but it wasn’t until 1900, when he gave a lecture on his work to the Royal Society in London, that the idea gained attention and praise. “It’s hard to find a medical discipline that didn’t try to incorporate the theory,” says Silverstein. In the end, however, Ehrlich “expanded the side-chain theory to greater length than it really deserved,” by claiming the blood proteins that amplified the action of antibodies—known as the complement system—functioned via an interaction with a specific antibody or side chain. (In fact, complement proteins kill all antibody-coated cells, rather than specifically targeting particular antibodies.)

By around 1915, Ehrlich’s side-chain theory had been largely rejected, in part because it stipulated that every cell expressed all of the receptors it might need to neutralize toxins or infection. Other researchers “began finding antibodies against everything; against normal, non-dangerous proteins, like egg albumin,” Silverstein says. With that kind of diversity, it was inconceivable that a cell could carry all possible receptor configurations. “That’s what killed his side-chain theory,” adds Silverstein.

Although Ehrlich is today recognized as one of the founders of immunology—and for his pioneering work on chemotherapy—Silverstein says Erlich’s side-chain theory has been largely forgotten and is almost never cited as an inspiration by modern immunologists. 