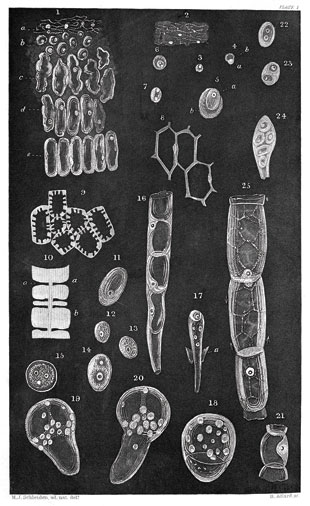 GREEN SHOOTS: Matthias Schleiden was not satisfied merely with classifying plants; instead, he studied them under his microscope. Those observations prompted Schleiden to theorize about the importance of cells and their nuclei. This picture shows Schleiden’s sketches of an assortment of cells and embryonic structures from a palm, an orchid, the cherry rice-flower, and several other plants.WELLCOME LIBRARY, LONDONIn 1837, Matthias Schleiden and Theodor Schwann were dining together in Berlin when Schleiden mentioned a recent discovery by the Scottish botanist Robert Brown: the nucleus. Brown had shown that it was present in a variety of plant cells.

Schwann, an animal physiologist, and Schleiden, a botanist, were students of Johannes Peter Müller at Berlin’s Humboldt University. When  Schwann heard about the nucleus, he realized that he had seen a similar structure in the vertebrate notochord—a rodlike structure in the embryo that develops into the spinal column. Sure enough,...

Robert Hooke had coined the word “cell”—short for cellula, or “small compartment” in Latin—in the mid-17th century, after he’d seen tiny rectangular shapes while studying slices of cork using a rudimentary microscope. But Hooke had not grasped the importance and ubiquity of cells in plants. And by Schwann and Schleiden’s time, though animal physiologists had observed structures that would later be recognized as cells, little evidence had arisen to suggest that these structures had much in common with plants’ boxy, walled compartments.

Based on his microscopic observations of various animal tissues—from notochords and cartilage in tadpoles to the pith of birds’ feathers to the aorta of a pig fetus—Schwann proposed that all animal tissues are composed of cells, and that the cell was the fundamental structural and functional unit of all living organisms. “The real contribution of Schleiden and Schwann was to say [cells] were everywhere,” says Laura Otis, a professor of English at Emory University in Atlanta and author of Müller’s Lab, a book about Müller and his students.

In his 1838 article “Contributions to Phytogenesis,” Schleiden had written that cells and their nuclei are the essential building blocks of plants, beginning in the embryo. Schwann published his theories a year later, in a book called Microscopical Researches into the Accordance in the Structure and Growth of Animals and Plants: “[I]t may be asserted that there is one universal principle of development for the elementary parts of organisms, however different, and that this principle is the formation of cells.” That proposition, he explained, “as well as the conclusions which may be drawn from this proposition, may be comprised under the term cell theory.”

Müller’s influential lab was the perfect place from which to disseminate such ideas. Indeed, Müller included cell theory in his widely read Handbook of Human Physiology. “From the 1840s to the 1880s it was probably the most important physiology textbook in Europe,” says Otis. “Everyone read Müller.”

Schwann and Schleiden had not understood that cells arise through a process of division, however. Schleiden argued that cells form around nuclei, with cell membranes growing out of nuclear structures. Schwann, meanwhile, thought that animal cells tended to “crystallize” out of the material between previously existing cells, which he called the cytoblastema.

Soon after formulating cell theory, both Schwann and Schleiden took professorships in other cities. Their ideas continued to be refined by Müller’s students, such as Rudolf Virchow, who popularized the idea that all cells arise from cells. That was the final pillar of cell theory, a sketchy set of ideas that, once refined, eventually formed the edifice of modern biological research.