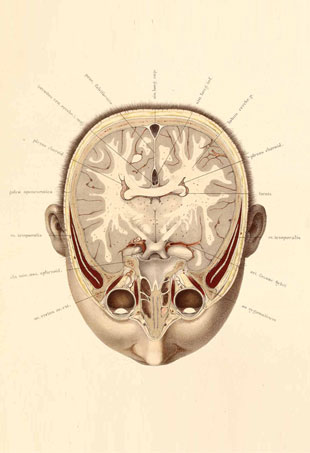 SPLITTING HEADACHE: To create his anatomical drawings, Christian Wilhelm Braune used transparent paper to accurately trace details revealed at the surface of the frozen body slice. Working from those tracings, he then carefully produced detailed woodcuts and surrounded each resulting lithograph with a faint halo of annotations.COURTESY OF U.S NATIONAL LIBRARY OF MEDICINEOne of the most striking developments in 19th-century anatomical illustration was made possible not by a scalpel, but by a saw. Topographical anatomy, in which cadavers were sawed into slices to reveal a cross-sectional view of the organs and tissues inside, was attempted as early as the Renaissance. But, not surprisingly, the sawing motion distorted the placement of the body’s innards. It wasn’t until the early 1800s that Dutch anatomist Pieter de Riemer began to freeze the cadavers in order to harden tissues and ensure that organs stayed put when being sawed.

Braune describes parts of the process in his most famous book An Atlas of Topographical Anatomy: After Plane Sections of Frozen Bodies, originally published in German in 1872 and translated into English 5 years later. “[T]he section [was] carefully performed by means of a broad, fine-edged saw,” he wrote of the first of 30 colored woodblock lithographs presented in the book, “much in the same way as two workmen would saw the trunk of a tree.”

Working with both male and female cadavers, Braune sawed straight across the head, both underneath the nose and above the eyes, as well as down the center of the head along the sagittal plane to expose the full internal profile. He also sawed through the pelvis, just above the thighs. He even sliced up a pregnant woman, sawing directly through the womb and fetus. “It wasn’t like dissection,” Sappol says. “You could see the different parts in relation to each other in situ.”

The work must have been painstaking and gruesome, but the results were stunning. “They are incredibly beautiful; real eye candy,” says Sappol. They also provided new anatomical knowledge through both the images themselves and Braune’s detailed descriptions. “Whatever enthusiasm there was for anatomy at this point, it was created by Braune,” says Sappol.

Braune even inspires modern-day anatomists, Sappol adds, noting that his work paved the way for the Visible Human Project, a National Library of Medicine initiative to create three-dimensional representations of the human body. Only this time around, the cadavers were machine milled at intervals of 1 mm for the male and 0.33 mm for the female and digitally scanned, rather than carved up with a carpenter’s saw and traced by hand.