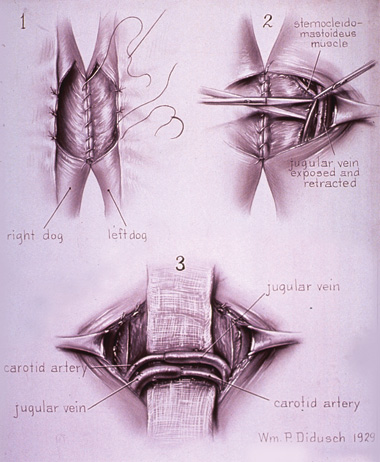 BLOOD TIES: Firor’s experimental cross-circulation procedure involved stitching the carotid artery of each dog in a pair to the other’s jugular vein, as illustrated by artist William P. Didusch. AM J PHYSIOL, 96(1): 146-52, 1931

In 1929 and 1930, Johns Hopkins Medical School surgeon Warfield Firor carried out a series of experiments to determine how long blood could flow between animals with joined circulatory systems. Without using any anti-coagulants, Firor attempted to establish cross circulation in over 40 pairs of dogs by suturing the carotid artery of each dog in a pair to the external jugular vein of the other. After the operation, the pairs of dogs were bound together with adhesive plaster and kept unanesthetized so they could exercise, feed, and sleep at will. Although similar cross-circulation experiments had previously managed to maintain blood flow between animals for a few hours, Firor’s method allowed for the free and uninterrupted...

Only two pairs of dogs survived the record-breaking 6 days of cross circulation. Most of the dogs died fairly early on from blood clots or from rupturing of the wounds. In four cases, one of the dogs bled to death into the other shortly after the blood vessels were joined. Unsurprisingly, when Firor reported the details of his cross-circulation experiments in 1931 in the American Journal of Physiology, the Society for the Prevention of Cruelty to Animals became enraged. The organization rented a window on a street bordering the Hopkins campus and displayed a huge sign proclaiming that Firor was torturing dogs. The sign remained there for more than a month, much to the dismay of Firor’s superiors.

While Firor’s procedure required two dogs of roughly the same size, a similar technique developed nearly 2 decades later at the University of Minnesota by the “father of open heart surgery”—C. Walton Lillehei—enabled cross circulation between dogs of different sizes. Inspired by the realization that a mother serves as the oxygenator for her fetus, Lillehei connected the femoral artery of a large dog to the arterial system of a much smaller recipient using plastic tubes and an external pump for maintaining a low flow rate. While connected to the larger donor, the heart of the smaller dog was stopped and opened. Both animals recovered. Lillehei’s “controlled cross-circulation” technique entered human clinical trials in 1954 and was first used to correct a ventricular septal defect in a 1-year-old boy. The baby’s father, who shared the boy’s blood type, served as a living heart-lung machine. Although the operation was a success, the baby died 11 days later of pneumonia.

As late as the 1950s, the term “residency” in medicine was used indiscriminately and could refer to any period a physician-in-training spent in the hospital after the initial internship year—regardless of whether it included any active training or supervision. Firor, who himself trained as a surgeon under Hopkins luminaries William Halsted and Dean Lewis, was an early critic of the lack of oversight in surgical residencies and was instrumental in instituting a minimum 4-year residency requirement and in creating the first residency review committee. “It would not be incorrect to consider him the father of the residency review system,” W. Dean Warren, then Chairman of the Department of Surgery at Emory University, wrote in the 1983 presidential address to the annual meeting of the American Surgical Association.