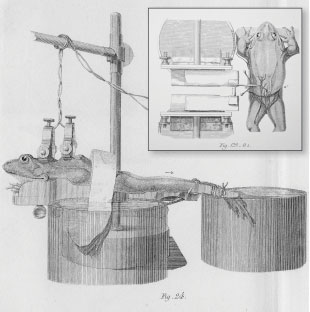 FAIL-SAFE FROG: To demonstrate in vivo “negative variation”—known today as a nerve signal, nerve impulse, or action potential—Emil du Bois-Reymond would secure a frog in a clamp and slice an opening in its back to access the spinal cord. He would then insert metal electrodes to stimulate whole-body tetanus, a prolonged muscle contraction, by discharging an electrical current to the central nervous system. Strips of wet blotting paper draped over the frog’s body served as the electrodes connecting the frog to a saline pool below, which was linked to a galvanometer that recorded the expected change in current. “This is not some trace observance that has to be descried amidst ambiguous conditions and cases of failure,” du Bois-Reymond wrote in the second volume of his treatise on electrophysiology, first published in 1849; “no, this is about a needle moving forty to seventy degrees, about an experiment so simple, striking, and...

Tasked with replicating and expanding Matteuci’s work, du Bois-Reymond sought to improve upon his contemporary’s techniques. He discovered that the use of blotting paper soaked in a simple saline solution could prevent contact electricity, small currents generated by organic tissue when in contact with a metal electrode. “Those currents were artifacts of the apparatus, and they masked or confused any attempt to detect electricity in organic tissue,” says Finkelstein. Du Bois-Reymond also developed electrodes made of modeling clay, zinc, and zinc sulfate that didn’t require immersion in a buffer. But perhaps his most notable innovation was in the instrument he built to better measure the signals detected by the electrodes.

Like Matteuci, du Bois-Reymond used an electromechanical instrument known as a galvanometer, which has a coil of wire that spins about a fixed magnet when a current moves through the coil. And like Matteuci, he hooked up his galvanometer to the calf muscle in a frog’s leg; applied an electric current to trigger tetanus, the prolonged contraction of the muscle; and saw the galvanometer’s indicator needle swing from the positive to the negative quadrant, signifying a reduction or reversal of the current—a reflection of the change in voltage that occurs when the cells are stimulated.

But du Bois-Reymond wasn’t satisfied with measuring the electrical currents in muscle. He wanted to directly measure the activity in the nerves that stimulated muscle contraction. Attaching his galvanometer directly to the nerve yielded no change in signal upon stimulation, however; he needed a better galvanometer. His instrument had a coil with 6,000 windings (more windings make the electromechanical instrument more sensitive to small, transient currents). For his new device, he spent weeks winding miles of wire some 24,000 times until he had “constructed, almost by hand, the most powerful galvanometer in existence,” Finkelstein says. And in 1847, du Bois-Reymond achieved his goal, observing in nerves the same negative swing of the needle he had seen in muscle tissue.

Finkelstein, who recently authored a biography of du Bois-Reymond, credits the scholar with providing the basis for modern neural recording methods. Vacuum-tube amplifiers, microelectrodes, even the Nobel Prize–winning patch-clamp technique are all physical devices for measuring the small-scale electrical currents of living tissue, Finkelstein points out. “I call these, maybe too harshly, ‘footnotes’ to du Bois-Reymond’s original techniques. . . . Today everyone uses some variation of [du Bois-Reymond’s] basic technique in electrophysiology.”