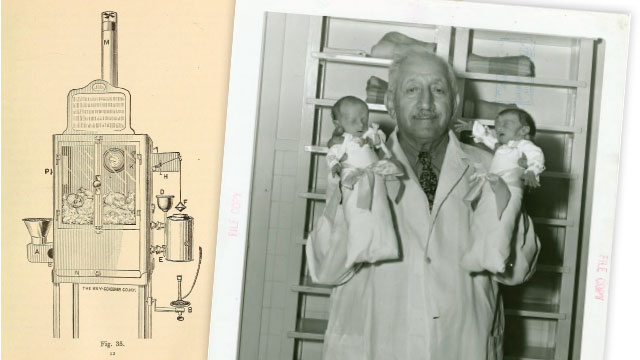 BEGINNINGS: Alexandre Lion’s 1889 design for a premature-baby incubator included a thermostat-regulated heater and forced ventilation system. Physician-cum-showman Martin Couney (right) helped publicize the incubator technologies designed by Lion and others for premature infant care. However, some of his shows in amusement parks at Coney Island and elsewhere caused him to be associated by many with exploitative “freak shows”—an image he spent most of his life trying to shake. L. FISCHER, INFANT-FEEDING IN ITS RELATION TO HEALTH AND DISEASE, F. A. DAVIS COMPANY, 1901; New York World’s Fair, 1939-1940, New York, N.Y.

In the 1880s, premature birth was mostly a mother’s issue. Some hospitals used simple technology, inspired by chicken incubators and heated by hot water bottles, to keep premature babies warm. And studies conducted by the makeshift incubators’ creator, Stéphane Tarnier, showed that such care reduced infant mortality. Still, most hospitals focused “just as much on breastfeeding and...

French physician Alexandre Lion took a different approach. In 1889, he patented an incubator in which temperature was regulated by a thermostat—“a tricky technology” back then, says Baker—and ventilation was provided by an electric fan. Rather than extra support, Lion’s incubator was “almost an artificial mother.”

But such newfangled technology wasn’t cheap. And this was in a time when hospitals by and large functioned like charities. Lion, however, had an unusual solution. To popularize the invention, he organized a wildly successful Kinderbrutenstalt, or “child hatchery,” at the Berlin Exposition of 1896. An article in London’s The Strand Magazine reported that in two months, more than 100,000 people viewed Lion’s show, which consisted of nurses caring for six incubated premature infants, and called it the exposition’s “most attractive exhibit.” The article included photos of babies “saved” by the incubator intervention, though unlike Tarnier, Lion didn’t conduct research comparing infant survival rates between babies who used his device and those subjected to lower-tech treatments.

Incubator shows quickly became a popular storefront attraction in Paris, with ticket sales funding incubator installation and maintenance. Interest also rose across the Atlantic; in 1901, one of Lion’s associates, physician Martin Couney, held a show at the Pan-American Exposition in Buffalo, New York—part of what Couney would later refer to as “propaganda for the proper care of preemies.” A handful of the devices were installed in maternity wards from Chicago to New York.

Yet excitement didn’t last. Incubators remained inaccessibly expensive, and the growing popularity of eugenics in the early 20th century ran counter to the idea of taking measures to save premature infants, then still known as “weaklings.” Several exhibition mishaps in the early 1900s—including a gastroenteritis epidemic in Louisiana and a fire at Coney Island—didn’t help.

It would be decades before incubators would make a comeback in US hospitals following World War II—only to fall out of favor again in the 1970s, and then return with oxygen provision and other features by the end of the century, Baker says. “It’s a reminder that technology does not evolve on a line of progress.”

Now, with access to modern neonatal intensive care units, babies born as early as 23 weeks of gestation have a 50 percent chance of survival. In Lion’s time, many if not most babies born under 36 weeks died. While he published no research about infant care, Lion retains a legacy as a “popularizer of the idea that premature babies were medically treatable,” says Baker. “That was not a given before.”