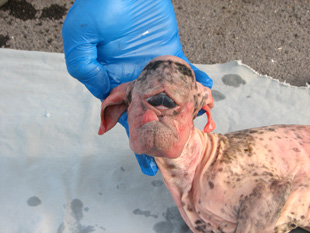 LOOKING AT EWE: This 2008 photograph shows a cyclopic lamb delivered after its mother was fed cyclopamine—a plant compound that disrupts Hedgehog signaling—as part of a study to define the window of development when the fetus is most susceptible to its effects. These malformations develop if the ewe ingests cyclopamine between gestation days 13 and 15 (the total gestation for a sheep is approximately 150 days, according to USDA biologist Kevin Welch). The compound prevents proper cell division along the midline of the head, leading to a single eye, malformed brain, and missing upper jaw.USDA, POISONOUS PLANT RESEARCH LABORATORY

In the 1950s, Idaho sheep ranchers had a problem. About a quarter of their lambs were being born dead or deformed—sometimes with a single eye centered in the middle of their forehead, like the Cyclops of Greek legend, or missing their upper jaw. There were times when the pregnant...

Ranchers in the area had seen these deformities on occasion for the last 50 years, but in the 1950s, the US Department of Agriculture (USDA) established a lab in the West, permitting access to researchers equipped to tackle the problem. In 1954, ranchers contacted Wayne Binns at the Poisonous Plant Research Laboratory (PPRL) in Utah, the closest division of the then Animal Disease and Parasite research program of the Agricultural Research Service. Binns investigated the cause of the malformations with his colleague Lynn James and a team of researchers.

The scientists first collected plants from the area and fed them to rats, but had no success recapitulating the deformities. “It was a lot of trial and error,” says Kevin Welch, a biologist at the PPRL hired by James in 2004. Eventually, the team took the sheep themselves to the grazing area to watch what they ate. With the herders’ help, the researchers were able to locate the culprit plant and identify the teratogenic compound. They named the chemical cyclopamine for the cyclops-like deformity it caused in developing lambs. Once the problem was diagnosed, the ranchers could keep their pregnant sheep away from it, and the case of Idaho’s cyclopes was closed.

Decades later and hundreds of miles farther west, however, cyclopamine would reappear at the heart of a new investigation.

In the 1990s, Philip Beachy of Stanford University began researching a signaling pathway called Hedgehog, involved in development and cell division. He used knockout mice to explore the ramifications of mutating the pathway in mammals and ended up creating embryos with the same phenotypes that had been observed in the Idaho sheep—though he didn’t know it at the time. “We got a real bonanza of developmental phenotypes that gave us hints and clues to the patterning of many different tissues in the mammalian embryo,” he says.

In 1996, Beachy stumbled across a photograph of a cyclopic lamb published in the leading textbook Developmental Biology and started putting the puzzle pieces together. Cyclopamine’s effects so closely matched those in his lab mice that Beachy devoted his resources to untangling the mechanistic connection. “What we found was that cyclopamine doesn’t affect production of the Hedgehog signaling protein, but it blocks the ability of cells to respond to that signal,” says Beachy.

The compound is now used as a molecular tool to study the different parts of the Hedgehog signaling pathway. And, because the pathway is implicated in basal cell carcinoma, pharmaceutical companies have harnessed synthetic cyclopamine for cancer treatments. “It’s had a tremendous impact on cell biology,” says Welch.