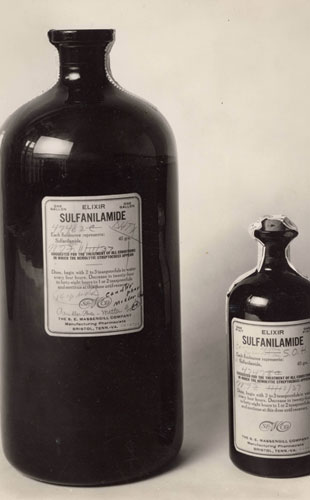 LETHAL LIQUID: In 1937, the S.E. Massengill Company of Bristol, Tennessee, began selling bottles of Elixir Sulfanilamide, a liquid version of a popular antibiotic of the day. But more than 100 people died after taking the drug, and investigators from the US Food and Drug Administration (FDA) identified the drug’s solvent, diethylene glycol, as the killer. FDA HISTORY OFFICEThe US Food and Drug Administration’s role in the regulation of novel medicines was born out of tragedy. Seventy-one adults and 34 children died in the fall of 1937 after taking a drug called Elixir Sulfanilamide to treat a variety of ailments, from gonorrhea to sore throat. At that time, the FDA, which had been launched in 1906 as the Bureau of Chemistry, served simply to police claims made about food and drug ingredients. No formal government approval was required to market new drugs.

“The initial 1906 legislation was relatively...

That all changed in 1938, after the deaths linked to Elixir Sulfanilamide had become a national scandal. Six years earlier, German pathologist and bacteriologist Gerhard Domagk discovered that a chemical called prontosil protected against certain bacterial infections in mice. Further research demonstrated that the compound’s active ingredient, sulfanilimide, could fight streptococcal infections in humans, prompting several pharmaceutical companies—including Merck, Squibb, and Eli Lilly—to begin making sulfanilamide drugs. These medicines were mostly formulated as capsules and tablets, but the S.E. Massengill Company of Bristol, Tennessee, decided that a liquid form of sulfanilamide could also be a big seller.

Massengill’s chief chemist concocted a solution of 10 percent sulfanilamide, 72 percent diethylene glycol, and 16 percent water. The company’s internal control lab approved the solution’s appearance, taste, and fragrance—it was flavored with raspberry extract, saccharin, and caramel, among other ingredients—and by September 1937, Massengill had distributed 240 gallons of the liquid, called Elixir Sulfanilamide, across the country. 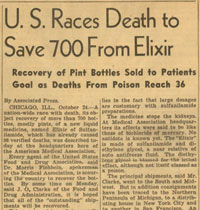 SAVING LIVES: Although the FDA didn’t regulate drug safety at the time, and therefore had no authority to reprimand the company, the agency was able to track down and seize bottles of Elixir Sulfanilamide on a technicality—“elixir” was a designation reserved for drugs containing ethanol—an operation that saved as many as 4,000 lives.FDA HISTORY OFFICEBut commercial success soon soured, as the first deaths were reported in October: six patients in Tulsa, Oklahoma, died of renal failure following treatment with the drug. FDA Commissioner Walter Campbell immediately ordered the vast majority of the agency’s 239 inspectors and chemists to investigate, and researchers quickly fingered the medicine’s solvent, diethylene glycol, as the cause of the deaths. But under the regulations of the time, Massengill hadn’t really done anything wrong: analyses of the concoction taken by the Tulsa patients revealed the ingredients to be exactly what the company had said they were. (The company had only broken the law by calling the medicine an “elixir,” a designation that was reserved for drugs containing ethanol.)

The disaster provoked a public outcry that led to the passage of the 1938 Food, Drug, and Cosmetics Act, which gave the FDA power to monitor the safety of new drugs. “Unfortunately, it took a disaster like this to get the senators to vote and empower the FDA like it should have been empowered to begin with,” says Wax, who has studied the Elixir Sulfanilamide tragedy (Ann Intern Med, 122:456-61, 1995). It wasn’t until October 1962, however, that Congress passed the Kefauver-Harris Drug Amendments, requiring companies to provide evidence of efficacy, in addition to safety, for drug approval.