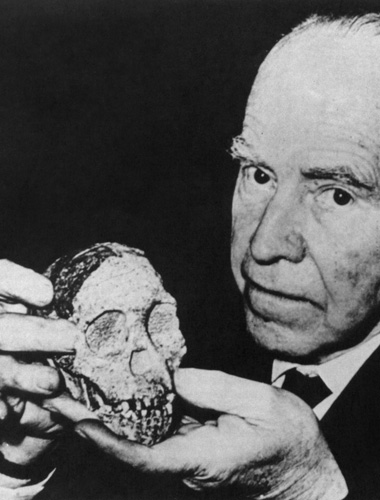 FIRST OF ITS KIND: Raymond Dart’s classification of the approximately 2.5-million-year-old Taung Child skull as an upright-walking hominin was met with skepticism by contemporaries who argued its brain size was too small to merit such a classification. SCIENCE SOURCE

Australian anatomy professor Raymond Dart was adjusting the collar of his dress suit in preparation for a friend’s wedding when a box, shipped from a limestone quarry near Taung, South Africa, arrived at the doorstep of his Johannesburg home in November 1924. Dart abandoned his collar to dig through the package’s contents—all the while ignoring the grumblings of  his wife and the groom, who were anxious to begin the wedding ceremony. Inside the box, he found a fossilized mold of a brain and a matching child’s skull partially buried in stone. Dart quickly realized the significance of the finding, and by February 1925 had published an article in Nature identifying...

According to the era’s prevailing view— “proven” by the anatomy of the Piltdown specimen, which was later unmasked as a hoax—increases in brain size preceded the emergence of other human attributes during early hominin evolution. While the Taung skull had human-like characteristics such as small canines, a steep forehead, and a spinal cord alignment that suggested bipedalism, Taung’s brain size was closer to that of a nonhuman ape. The fossil “heralded a new direction” in the study of human evolution, says Kieran McNulty, a paleoanthropologist at the University of Minnesota, by providing evidence that changes in brain size lagged behind the development of a human-looking face and upright walking. Nevertheless, the fossilized endocranial cast, or endocast, suggested to Dart that Taung’s brain was beginning to reorganize in recognizably human ways. Dart calculated that the ratio of cerebral cortex to cerebellum in Taung’s brain was larger than in gorillas and chimpanzees and also noticed that a groove on the outside of the brain, the lunate sulcus, appeared to have moved backward into a position closer to that seen in humans.

Although Dart’s discovery instantly made him famous, many anthropologists met his interpretations with extreme skepticism. The study of human evolution was still in an “embryonic stage,” says Goran trkalj, a biological anthropologist at Australia’s Macquarie University. Taung’s small brain flouted orthodox theories, leading some anthropologists to group the extinct species with gorillas and chimpanzees. It wasn’t until 1932 that A. africanus was classified as a hominin, and not until the 1940s, as more Australopithecus fossils were identified, that the field began to accept Taung.

Scientists are still learning from the Taung skull and endocast. In humans, a seam along the frontal bone closes slowly because the brain expands rapidly after birth. But in nonhuman apes, it fuses and ossifies quickly. Taung, now estimated to be about 3 or 4 years old at the time of death, retains this “persistent metopic suture,” suggesting its brain development had already diverged from that of the other apes, says Dean Falk, who studies the evolution of cognition at Florida State University. But many unanswered questions of developmental timing and patterns remain, says McNulty. “We’ll be looking at Taung for decades to come.”