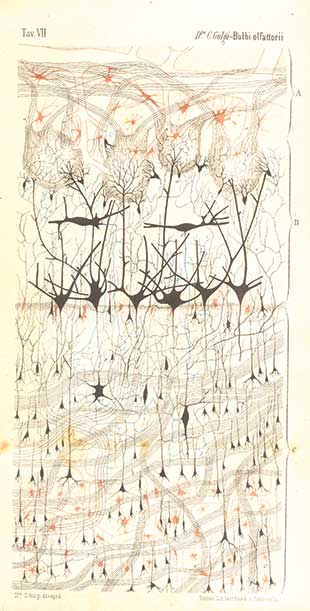 A FIRST LOOK: Camillo Golgi’s original black-and-white drawing of a dog’s olfactory bulb appeared in a paper in the Rivista Sperimentale di Freniatria e Medicina Legale in 1875. Colored plates appeared in reprinted versions distributed by Golgi and in the German translation of his paper. Golgi indicated three layers in his drawing. The superficial layer (A) is composed of nerve fiber bundles made of myelinated axons (black lines), a branching blood vessel (outlined in red), and glial cells (red). The nerve fiber bundles enter spheres of cell bodies called glomeruli in the middle layer (B), which consists of gray matter (nerve cell bodies and dendrites). Large mitral cells lining the middle layer (black) are arranged such that their dendrites reach toward the glomeruli, where they form synapses with the axons extending from the superficial layer. The mitral cell axons (some of which are shown in blue) aim for the inner...

He impregnates formalin-fixed nervous tissue sections with potassium dichromate and silver nitrate, causing microcrystals of silver chromate to fill in the delicate dendrites and axons of neurons. The technique paints the structures black and makes them visible in situ for the very first time. Golgi would spend several years perfecting the reaction, which likely started out as an accidental discovery. According to Paolo Mazzarello, director of the Golgi Museum in Pavia, Italy, Golgi may have first noticed the reaction’s potential to mark neurons while staining connective tissues surrounding the brain’s blood vessels with silver nitrate, a commonly used compound at the time. “He probably saw some partial staining of the [nerve] cells,” and from there, a combination of chance and intuition led Golgi to develop the invaluable method.

Still in use today, Golgi’s black reaction, now called the Golgi stain, made it possible to see the fine structures of neurons and their branching processes, enabling Golgi and many scientists after him to draw conclusions about how neurons interact with each other.

“By using this method, it was possible for neuroscientists and neuroanatomists to lay down the microscopic anatomy of the nervous system,” says Mazzarello.

Golgi’s first published drawing of neurons stained using the black reaction featured the nervous structures of a dog’s olfactory bulb. Golgi used a camera lucida to project an image of the stained tissue onto paper so that he wouldn’t miss any details in his drawing. He categorized the tissues of the dog olfactory bulb into three layers: a thin outer layer of bundled neuronal axons, or nerve fibers; a middle layer of gray matter made of cell bodies and dendritic processes; and a dense layer of white matter containing alternating layers of nerve fibers and glial cells.

Of the dendrites he saw in the middle layer, Golgi wrote, “they cross and lie over each other in a most complicated manner, but never enter into any real connections or anastomoses.” The question of connections was an important one to Golgi. Mazzarello says that when Golgi examined his preparations, “he had in mind a sort of holistic conception of the brain, [an] idea that the brain worked as a unit.”

Ironically, Golgi’s method would be used several years later by Santiago Ramón y Cajal to support the latter’s view of the nervous system as a collection of individual elements. “With the same method, one saw network everywhere and the other saw single cells interacting everywhere,” says Mazzarello.