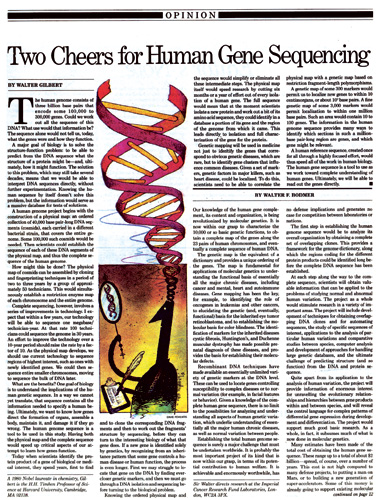 Walter Bodmer, along with Walter Gilbert, a 1980 Nobel laureate in chemistry and a Harvard University professor, wrote opinions advocating for a project to sequence the human genome in the premier issue of The Scientist magazine, published October 20, 1986.

In The Scientist’s first issue, Walter Bodmer, then Research Director at the Imperial Cancer Research Fund Laboratories in London, and later the second president of the Human Genome Organisation, wrote an opinion about the potential of a Human Genome Project (HGP). Now, more than a decade after the first draft genome was published, he reflects on the accuracy of those 1986 predictions.

1986: ?Given a knowledge of the complete human gene sequence, there is no limit to the possibilities for analyzing and understanding…essentially all the major human chronic diseases…?2011: "Now, with next-generation sequencing, one can even identify a mutant gene in a single appropriate family."

1986: “The project will provide information of enormous interest for unraveling of the evolutionary relationships between gene products within and between species, and will reveal the control language for complex patterns of differential gene expression during development and differentiation.” 2011: “This has been achieved because, as expected, the HGP generated a huge amount of information on other genomes. However, only now is the challenge of the genetics of normal variation, including, for example, in facial features which are clearly almost entirely genetically determined, being met. Next, perhaps, will come the objective genetic analysis of human behavior.”

1986: ?The major challenge is to coordinate activities of scientists working in this field worldwide.?2011: "Collaboration has proved to be fundamental to the success of the Human Genome Project, which set the stage for global cooperation and, most importantly, open exchange and availability of new DNA sequences, and, more generally, large data bases of information."

1986: “The project will include…development of approaches for handling large genetic databases.”2011: “As predicted, there have been major developments in the ability to handle large databases. Accompanying this have been new approaches to data analysis using, for example, Markov Chain Monte Carlo simulations that are hugely computer intensive.

The most surprising, and certainly not predicted development, has been the extraordinary rate of advance first in the techniques for large scale automated genotyping, then in whole genome mRNA analysis and finally in DNA sequencing where the rate of reduction in cost and increase in speed of DNA sequencing has exceeded all expectations and has even exceeded the rate of developments in computing. This has, for example, made population based whole genome sequencing more or less a reality.

Perhaps one of the greatest future technological challenges will be to apply these techniques to single cells and to achieve a comparable level of sophistication of cellular analysis, to that we now have for working with DNA, RNA, and proteins.”

1986: “We should call it Project 2000.”2011: “This prediction also came to pass, with a little political license. I am referring to the fact that Bill Clinton and Tony Blair announced the completion of the project on 26th June 2000, while the first proper publication of a (very) rough draft was not till February 2001 and it took several more years until a fully reliable complete sequence became available. The public announcement was no doubt politically motivated with, I am sure, support from the scientists, to promote what was being done and have something to say at the beginning of the new millennium. An intriguing interaction between science and politics, that in contrast for example to the Lysenko episode in the Soviet union, was quite harmless and may even have been of benefit.