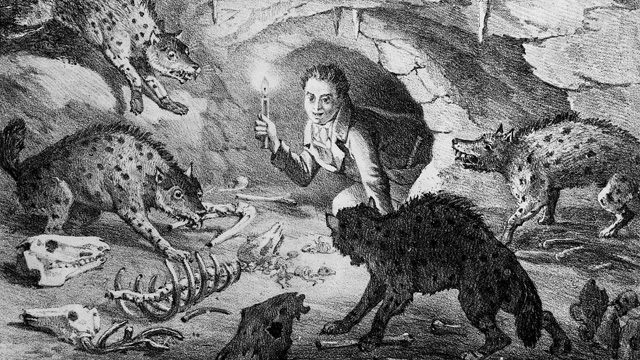 An interpretive drawing of William Buckland crawling into Kirkdale Cave where he found extinct cave hyenas and the remains of their prey. Drawn by Buckland’s friend William Conybeare.

In the summer of 1821, stone-quarry workers discovered a cave in Kirkdale, Yorkshire, that was littered with the remains of dozens of animal species, including hippos, rhinos, tigers, elephants, and, most numerous of all, hyenas. Upon hearing about the find, English geologist and Anglican minister William Buckland went to investigate, and surmised that the cave, which he dubbed the Hyena Den, had at some point in the ancient past served as the home of a pack of hyenas, which dragged their diverse prey to the cave to devour, even occasionally eating each other. But such ferocious creatures didn’t exactly fit with the minister’s idea of a biblical past.

By the beginning of the 19th century, most of the scientific community... Fragment of the lower jaw of a hyena found in the uppermost part of the den.

A popular explanation for how large, exotic animals such as elephants and hippopotamuses ended up in a cave in England was that the Biblical flood, described in the Book of Genesis, had washed them in. But because the mouth of the cave was barely large enough for a man to crawl in on his hands and knees, William Buckland deduced that the larger animals were scavenged by the hyenas and dragged into the cave in pieces. Smaller animals—which included wolves, foxes, horses, oxen, deer, rabbits, water rats, mice, weasels, and birds—were likely hunted and killed by the hyenas. Scientists now believe these tropical animals lived in England during a warm period before the last ice age known as the Ipswichian Interglacial, around 120 thousand years ago.

William Buckland was more than just a geologist—he was “a master storyteller,” says Adelene Buckland. As a lecturer at the University of Oxford’s Corpus Christi College, William Buckland would often bring a bit of “showmanship” to the classroom, she says, as well as to his scientific publications, which often employed the dramatic style of a novella or play. Not only did William Buckland go on to describe the first definitive dinosaur fossil—the late Jurassic, 2-ton Megalosaurus—he also became widely known for his study of fossilized feces, or coprolites. He even went so far as to keep a collection of fossil dung inlaid in a coffee table in his house. “He would get guests to eat off of it and then tell them what it was,” Adelene Buckland says.

At the time he explored the Kirkdale cave, Buckland considered the Bible a historical text. He suggested that the flood, or the “last great convulsion” as he calls it, likely killed the cave’s inhabitants and deposited the layer of mud that covered most of the cavern floor. Later in his career, however, he came to the conclusion that there was no geological evidence for the Biblical flood, in Yorkshire or elsewhere. “It’s not so much that he doesn’t believe it happened, but rather he doesn’t believe there is any evidence for it,” Adelene Buckland says.