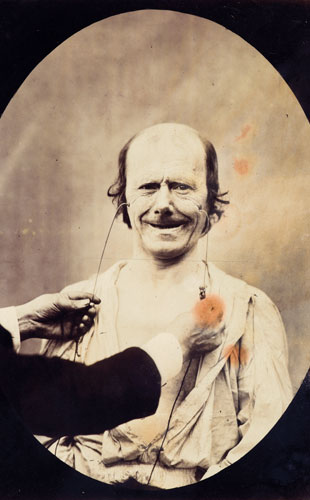 SAY CHEESE: For his emotion experiment, Darwin selected photographs from a collection by French physiologist Guillaume-Benjamin-Armand Duchenne, who was studying the facial muscles responsible for expressions. Duchenne re-created facial expressions of volunteer subjects by harmlessly stimulating muscles of the face with an electrical probe. Duchenne termed the expression depicted above “grimace,” while Darwin called it “laughter.”DAR.LIB.160 REPRODUCED BY KIND PERMISSION OF THE SYNDICS OF CAMBRIDGE UNIVERSITY LIBRARYDo upturned lips and sparkling eyes always suggest happiness? Is shock and awe regularly conveyed by a furrowed brow and gaping mouth? Do we learn to interpret such cues, or do we inherit an understanding? Charles Darwin began to speculate about the interplay of emotions, expression, and inheritance in the 1830s while traveling aboard the HMS Beagle. And in 1868, he designed a novel experiment he hoped would answer these questions—an experiment so intriguing that modern-day researchers at the University...

Darwin’s study took advantage of the new technology of photography to assess people’s reactions to various facial expressions. He showed participants photographs of people whose faces were artificially contracted by harmless electrical probes into expressions resembling those of emotions ranging from happiness to deep grief. He then asked viewers to interpret the expressions. These studies confirmed for Darwin his long-held opinion that expressions are universally understood, across languages, cultures, and even species—an opinion that had sprouted during the Beagle voyage from his observations of “human-like” expressions of animals. In his 1872 book The Expression of the Emotions in Man and Animals, Darwin wrote that “the young and the old of widely different races, both with man and animals, express the same state of mind by the same movements.”

If true, this supposition could guide current research in areas such as facial-recognition technology, autism, and our still-incomplete understanding of human behavior, says language professor Paul White of the University of Cambridge. But Darwin’s experiment included only 20 or so participants—mostly his friends and family—and he ignored some of the data. So White and colleagues decided to re-create the experiment using the same 11 photographs that Darwin showed his study participants. Between October 2011 and March 2012, more than 18,000 anonymous Internet users participated in an online study set up by White’s team as part of the Darwin Correspondence Project, which archives and researches letters written by and to Darwin.

Though the researchers are still evaluating the results, they have already observed a wide variety of answers for each photograph. Those evoking the more basic emotions, such as terror and surprise, elicited the most consensus, White says, while the photos meant to portray more complex feelings, such as deep grief, received a broader mix of answers—some of which might have been completely unrecognizable in Darwin’s day. “My favorite was ‘boredom,’ ” White says. For Darwin’s theory to work, he adds, you have to assume that everyone has the same vocabulary and repertoire of emotions. “Boredom was simply not an emotion back then.”

Indeed, the expression modern participants saw as bored, Darwin termed “hardness.” Despite the language-specific challenges of the experiment, however, the variety of responses may still support Darwin’s theory that certain expressions and their recognition are universal. Darwin also suggested that complex emotions—even those we can’t name—are blends of simpler ones, possibly explaining the diversity of answers White’s team has recorded.