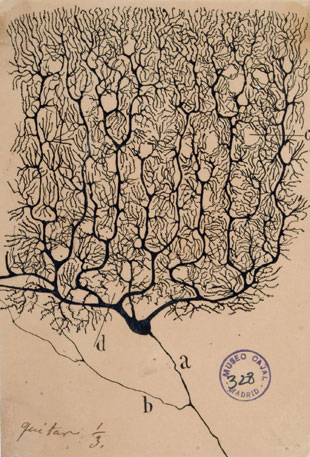 BRANCHING BEAUTIES: Ramón y Cajal used Camillo Golgi’s stain to visualize the fine-scale morphology of neurons in several areas of the brain. In this stunningly detailed illustration of a Purkinje cell in the human cerebellum, Cajal depicts the neuron’s famously thick forest of dendrites (c and d) branching off one side of the nerve cell body, the axon (a), and the collateral axon (b), which loops back to connect with the dendrites or cell body. Cajal’s remarkable ability to visualize serial sections was key to his proposal that gaps, later called synapses, separate individual neurons. CAJAL LEGACY. INSTITUTO CAJAL (CSIC), MADRID (SPAIN)In 1887, a young Spanish anatomist by the name of Santiago Ramón y Cajal visited Luis Simarro Lacabra, a colleague in Madrid who had recently returned from Paris with sections of brain tissue treated with an obscure staining technique. Developed 14 years earlier by the Italian physician...

Cajal used the technique to produce the exquisitely detailed illustrations of brain cells that later formed the basis for his “neuron doctrine,” which stated that the neuron is the basic anatomical and physiological unit of the nervous system. The work earned Cajal the 1906 Nobel Prize in Physiology or Medicine, which he shared with Golgi despite their almost complete lack of agreement about the basic structure of the nervous system.

This debate had split the burgeoning field of neuroscience for most of the 19th century. One camp—the reticulists, led by Golgi—thought the nervous system consisted of a diffuse network of continuous tissue, or reticulum, formed by the fused branches of dendrites and axons. The other camp—the neuronists—countered that the nervous system was composed of distinct individual elements, or neurons.

At the time of his first brush with Golgi’s stain, Cajal had been studying the nervous system for about a year. The anatomist was immediately drawn to the sharp, almost diagrammatic nature of the stained images. Although he peered through the same microscopes as his fellow anatomists, Cajal, an avid illustrator and painter since childhood, cultivated a deeper understanding of what he saw. “He was able to visualize five, six, even seven sections together and see how they functioned in three dimensions,” says Constantino Sotelo, an emeritus professor of neuroscience at the Institut de la Vision in Paris.

Cajal’s initial publications using the Golgi stain illustrated the cerebellum, retina, and spinal cord. But it was his investigations of the cerebellum in particular, in which he observed spaces between the tips of basket cells’ axons and adjacent Purkinje cell bodies, that most inspired the neuron doctrine. “It was very clear for Cajal to see that there was no possibility of continuity in those cells,” says Sotelo.

Cajal publicized the full details of the neuron doctrine in 1894 during a lecture at the Royal Society of London. The theory eventually became the foundation of modern neuroscience but its acceptance came slowly. Indeed, the first solid evidence in support of Cajal’s theory came in the 1950s with the first visualizations of the synapse—the junction between two adjoining neurons—using the newly developed electron microscope. With the structure debate resolved, neuroscientists began to focus on the question of how neurons communicate with each other, a problem that continues to occupy legions of researchers to this day. 