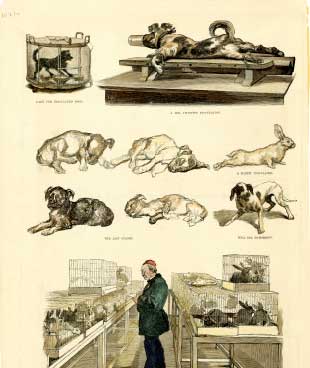 SHROUDED IN SECRECY: Pasteur initially believed that a vaccine had to be live in order to confer immunity. The method he claimed to have used to treat rabies in test subject Joseph Meister was based on his previous research in rabid dogs and rabbits (like the ones Pasteur is shown examining in this panel from Harper’s Weekly, 1884). This method involved passaging the virus through animals, then desiccating extracted spinal cord tissue for increasing lengths of time in an attempt to reduce its virulence. Meister received a series of injections apparently going from the least to the most virulent spinal cord. But Pasteur’s lab notebooks, released in the 1970s, suggest the concoction may instead have been developed with different methods not yet fully tested in dogs.COURTESY OF THE US NATIONAL LIBRARY OF MEDICINEOn July 6, 1885, three men in Paris prepared to treat Joseph Meister,...

Despite being relatively rare, rabies (or hydrophobia, as it was also known) commanded a fearful fascination in Europe; wildly foaming at the mouth, its victims died painfully and dramatically. But the virus’s incubation period also made rabies of interest to Pasteur—already a famous scientist in France—as a candidate for a new type of vaccine.

“The time from the bite to the sickness was pretty long, usually around a month or longer,” explains Kendall Smith, an immunologist at Weill Cornell Medical College. “There would be time to intervene with a therapeutic vaccine.”

By 1885, five years after starting work on rabies, Pasteur and his colleagues had developed a live viral preparation, which, Pasteur claimed, not only protected dogs from rabies infections, but prevented the disease from becoming symptomatic if administered postexposure.

Still, it was not without reluctance—or concern from his peers—that he agreed to administer a series of viral injections to the asymptomatic young Meister. “This will be another bad night for your father,” wrote Pasteur’s wife Marie to their children during the treatment. “He cannot come to terms with the idea of applying a measure of last resort to this child.”

But it seemed to work—Meister didn’t develop rabies. And after starting treatment of another boy that October, Pasteur declared the vaccine a success before the French National Academy of Medicine. The story became international news; even patients from America were soon shipped over to Europe to receive the miracle cure.

Of course, there were critics. “To conclude that a vaccine is successful, you have to compare a trial group against a control group,” says Smith. Skeptics argued that as the disease didn’t always become symptomatic, the vaccine’s efficacy couldn’t be confirmed; Pasteur, they said, was taking risks with children’s lives.

Pasteur’s secretive attitude further fuelled his opponents. “His papers were only three or four pages long,” Smith says. “There were no details, and no way you could reproduce any of it.”

Nearly a century later, in the 1970s, Pasteur’s laboratory notes (in the possession of his heirs until then) were made public. They revealed startling discrepancies between Pasteur’s research and his claims: although he had tested a vaccine on dogs, the concoction administered to Meister was made using different methods, essentially untested in animals. Its seeming success? Perhaps the result of an educated guess.

But appearances mattered more than transparency. In 1888, the Pasteur Institute was opened, and although his vaccine was soon superseded by a chemically inactivated alternative, Pasteur himself is remembered, rightly or wrongly, as a revolutionary scientist and a careful experimentalist. “Let me tell you the secret that has led me to my goal,” he is famously quoted as saying. “My strength lies solely in my tenacity.”