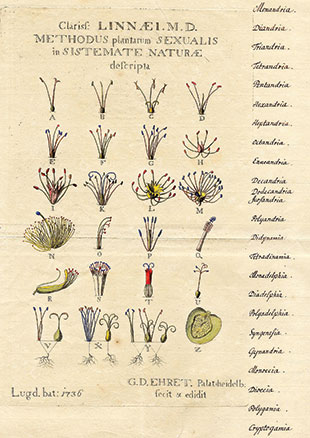 FLORAL SEXUAL ANATOMY: Georg Dionysius Ehret, one of the most esteemed botanical illustrators of the 18th century, drew this example of Carl Linnaeus’s plant classification system based on the sexual parts of flowers. Ehret had been working for George Clifford, a wealthy banker, when he met Linnaeus in the mid-1730s. Clifford had hired Ehret to do some artwork based on the plant collection in his gardens and greenhouses, and during this time, in 1736, Ehret also painted this iconic image of floral sex parts (assigning letters to Linnaeus’s numbered classes). Charlie Jarvis of the Natural History Museum in London says there was some dispute between Linnaeus and Ehret as to who invented the classification system, but ultimately Linnaeus earned the credit.WIKIPEDIACarl Linnaeus’s lasting legacy, hands down, is binomial nomenclature. He transformed what was once a clunky system for naming organisms, involving a formal name and a lengthy...

But in the 1730s, the self-proclaimed “prince of botany” made a contribution to taxonomy that, at the time, was just as profound as any of his other achievements. After realizing that floral sex parts varied in number, Linnaeus developed a plant classification system based on their sexual anatomy. The number of stamens (which produce male gametes), their length, and whether the stamens were fused relegated a plant to one of 23 Classes (there was a 24th class, nonflowering plants); the plant’s Order was then determined by pistils, the female structures. “I think it was quite enthusiastically taken up because of its simplicity,” says Charlie Jarvis, an expert on Linnaeus’s botanical nomenclature at the Natural History Museum in London.

Linnaeus’s focus on the arrangement of plants’ sexual anatomy afforded him the opportunity to make salacious puns, and he took it, referring to stamens as husbands, pistils as wives, and their arrangement as a marriage. The “bridal bed” became a rather crowded place for certain plants, and more sensitive botanists took offense at such indecent descriptions. Although Linnaeus took criticism poorly, “he didn’t care” to tone down the language, says James Reveal, a plant systematist at Cornell University.

Linnaeus’s plant classification system streamlined a complicated process, and botanists adopted it with zeal, especially in England. But after about a half century, taxonomists began to pick it apart, says Reveal, and by 1830 it was laid to rest for good. The fatal flaw was that the system didn’t represent true relatedness between taxa. Legumes, for instance, were split into two groups: those with 10 free stamens were placed in Decandria (Class 10; K in the illustration), while others went into Diadelphia (Class 17 or R) because nine of those stamens are fused into a single tube. However, it was apparent to botanists even then that legumes are more closely related and that the system did not represent natural relationships. “Linnaeus understood this,” says Jarvis. “He saw it as a means to an end, but one that in its time was very useful.”

The sexual organization system was eventually replaced by more natural systems of classification. In 2007, Birgitta Bremer of the Royal Swedish Academy of Sciences and Stockholm University looked at how well Linnaeus’s sexual classification system overlapped with today’s most commonly used system, the Angiosperm Phylogeny Group (APG), which is based on genetic analyses. Of Linnaeus’s 23 Classes of flowering plants, 22 include unrelated plants according to the APG. Only his Class 15, Tetradynamia (Class P), which includes broccoli, mustard, and cabbage and whose flowers have six stamens, four long and two short, contains plants that all belong to the same family under the APG system, the Brassicaceae. Bremer wrote in her study that “there is little correspondence between the sexual system and the APG-system.” But, she added, “this does not mean that the sexual system has been useless or misleading.” Nothing else came close to the simplicity Linnaeus introduced to classification. 