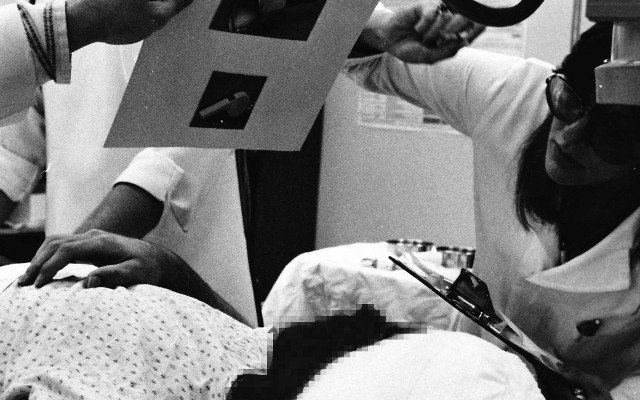 LANGUAGE AND MEMORY ASSESSMENT: Rebecca Rausch (far right), now a senior neurologist at the University of California, Los Angeles, is pictured here performing a modified version of the Wada test in the early 1970s. The patient is a candidate for epilepsy surgery to remove tissue from the brain hemisphere causing seizures. The test is required to determine if brain areas that underlie language and memory also reside in the same side of the brain. During the test, the patient names and recalls objects shown to him while an anesthetic—usually sodium amobarbital—is introduced to each hemisphere in turn. If linguistic deficits coincide with the anesthetization of the seizure-causing area, surgery will not be performed.© UCLAAs a medical student on the Japanese island of Hokkaido in the 1940s, Juhn Wada developed an interest in neurology, before “neurology” was formally a word and before dedicated departments existed anywhere in Japan....

His proposed approach was highly criticized until 1948, when Wada learned of a patient who had developed persistent, uncontrollable seizures—a young cook at an American base camp who had been shot in the head by a drunken soldier attempting to shoot off his hat. As a last resort, the cook agreed to let Wada anesthetize his brain, one hemisphere at a time. Upon the injection of an anesthetic barbiturate into an artery known to deliver blood only to the left hemisphere, the man’s seizures were successfully controlled. But the side effects of the barbiturate treatment were startling and immediately apparent. According to his written account, chills ran up and down Wada’s spine as the patient temporarily lost all language ability and motor function on the right side of his body.

Wada eventually moved to McGill University in Montreal, Canada, where he further developed the procedure into what is now commonly known as the Wada test. After he published the details of the technique in 1960, it became widely used to localize linguistic and memory function in epilepsy patients. Such testing is critical because not all patients use the left brain hemisphere for these functions, as the cook did. Surgery to treat seizures is to be avoided if the region causing seizures is in the same hemisphere that controls language and memory. Remarkably, this remains the routine method of language and memory lateralization assessment in presurgical epilepsy patients to this day.

“Over half a century, thousands upon thousands of patients have benefited from invaluable information that had been only obtainable from the Wada test,” Rebecca Rausch, a senior neurologist at the University of California, Los Angeles, tells The Scientist in an email.

Noninvasive alternatives are now coming to the fore, however. Just this year, the first set of detailed fMRI guidelines for language and memory assessment in epilepsy patients was published in Neurology (88:395-402). Although the Wada test remains the gold standard for the localization of language and memory, this publication likely initiates a switchover to using noninvasive fMRI methods for epilepsy patients scheduled for surgery.