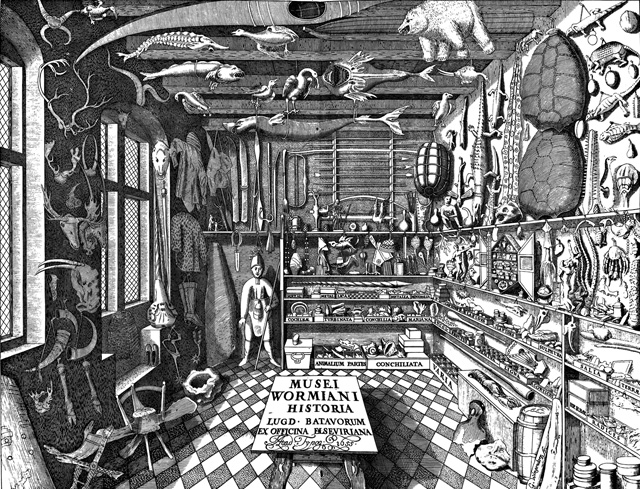 A WORLDLY COLLECTION: Ole Worm began collecting items for his cabinet in 1621, and continued until his death in 1654. Among the oddest pieces was a mechanical human figure (shown propped against the far back wall) that could move its arms at the turn of a hidden wheel. SMITHSONIAN INSTITUTION LIBRARIES

As Europeans extended their power and reach across the globe in the 16th century, collections of all sorts of curiosities and artifacts from around the world became the rage throughout Europe. Inside these sundry collections, called Wunderkammern or Kunstkammern (German for “wonder-rooms” or “art-rooms”), geological curiosities, such as geodes, nestled against South American feathered cloaks, medical rarities, or a painting of Vlad the Impaler. One of the most famous collections, that of the 17th-century Danish doctor Ole Worm, contained hundreds of natural history items carefully arranged in a room in his own home. Upon Worm’s death in 1654, the...

Worm trained in medicine at the University of Basel and practiced “demonstrative teaching,” using objects from his collection, as a professor of physics at the University of Copenhagen. Aiming for rarity over comprehensiveness, Worm looked for objects that tested accepted knowledge rather than confirmed it, explains Jole Shackelford, a historian of medicine at the University of Minnesota. An illustration of a bird of paradise, drawn from a specimen sent to Worm by a friend, served as proof that the birds did indeed have feet, contrary to what was popularly believed. As he explained in a letter, Worm aimed to give his students firsthand knowledge of the world, to “present my audience with the things themselves to touch with their own hands and to see with their own eyes…”

Worm’s goal of illumination is reflected in the organization of Museum Wormi­anum, which he separated into minerals, plants, animals, and man-made artifacts. A horse’s jawbone embedded in an oak root—one of around 40 original items from Worm’s cabinet that are still on display at the Natural History Museum of Denmark—represented the convergence of two dissimilar categories: plant and animal. Worm’s categorization may surprise modern readers: he placed man in the animal category, but listed mummies under minerals.

Worm suspected a hoax when he realized that he only encountered unicorn horns, considered a potent treatment for poison, and never other parts of the unicorn skeleton. When Worm’s friend and Denmark’s chancellor, Christian Fries, offered what he believed was an intact unicorn skull for examination, Worm determined that it belonged to a whale-like creature, most likely a narwhal. But Worm would also “pass along hearsay if the source was credible,” says Shackelford. Worm included in his collection an egg accompanied by sworn witness testimonials, including a parish priest’s, claiming it had been laid by a Norwegian woman named Anna Omundsdatter. When The Royal Kunstkammer was divided among specialty museums in 1824, the egg was boxed, sold, and lost to history.