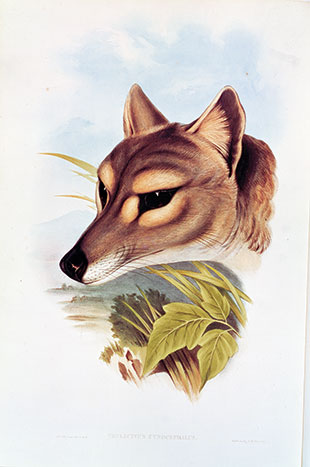 THE WONDER DOWN UNDER: Almost immediately after landing in Tasmania (better known at the time as Van Diemen’s Land) on September 18, 1838, Gould and traveling companion John Gilbert set out exploring. One inhabitant they documented was the Tasmanian tiger, which often attacked the island’s domestic animals. “The destruction [by this species] has, as a matter of course, called forth the enmity of the settler, and hence in all cultivated districts the animal is nearly extirpated,” Gould wrote. The plate above was completed by zoological illustrator Henry Constantine Richter, though many of Gould’s works were principally illustrated by his wife, natural history artist Elizabeth Coxen.© RICHTER, HENRY CONSTANTINE (1821-1902)/PRIVATE COLLECTION/BRIDGEMAN IMAGESIn May 1838, John Gould, a British zoologist and staff taxidermist for the Zoological Society of London, set sail for Australia. His wife’s brothers had emigrated to the island continent nearly a decade earlier and had been...

Along with his wife, his eldest son, a young nephew, zoological collector John Gilbert, and a couple of servants, Gould set off for Australia. Unlike many of his contemporaries, who were born into wealthy families and could undertake such expeditions without much concern for the financial consequences, “[Gould’s] Australia trip was an incredibly risky entrepreneurial enterprise,” says Jonathan Smith, a University of Michigan–Dearborn English professor who studies 19th-century literature and science. “It’s very clear from his correspondence that if he isn’t successful with this publication, there aren’t going to be any more John Gould bird folios.”

So once the family arrived that September, in addition to observing, collecting, and describing the fauna he found, Gould spent a good deal of time trying to acquire folio subscribers. Luckily, he had a good sales pitch. “Everything about Australian animal life was unusual,” compared to the organisms that had so far been documented by naturalists, says Smith. “[Gould] saw that both from a scientific and entrepreneurial standpoint.”

It wasn’t just the birds that caught his attention; he found the mammals of Australia and the surrounding islands equally fascinating. One animal described in detail in the resulting Mammals of Australia, published in three volumes between 1845 and 1863, is the now-extinct Tasmanian tiger (Thylacinus cynocephalus). In his description of the striped marsupial, Gould predicted its demise: “When the comparatively small island of Tasmania becomes more densely populated, and its primitive forests are intersected with roads from the eastern to the western coast, the numbers of this singular animal will speedily diminish, extermination will have its full sway, and it will then, like the Wolf in England and Scotland, be recorded as an animal of the past: although this will be a source of much regret, neither the shepherd nor the farmer can be blamed for wishing to rid the island of so troublesome a creature.”

The animal was hunted exhaustively to protect local sheep herds, and nearly 100 years after Gould wrote these words, the last known Tasmanian tiger died. “They were vilified and killed off,” says Penn State genomicist Webb Miller.

In the end, Gould’s Australian adventure proved successful both financially and scientifically, says Smith, and “it enabled him to move on to even bigger and better things,” such as a spectacularly popular folio on hummingbirds. In total, he published 41 volumes with some 3,000 plates during his career. “Gould was a working-class kid, and he rises to become this fabulously successful entrepreneur [and] one of the top ornithologists in Victorian Britain,” says Smith. “It’s an interesting rags-to-riches story.” 