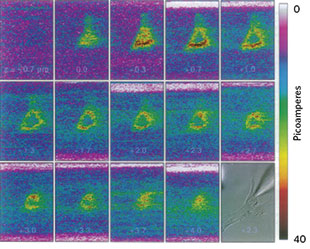 LOCAL ACTION: Winfried Denk captured a brain-tumor cell from a mouse responding to receptor activation. Each panel represents a different depth, with the upper left starting below the cell. A tightly focused two-photon laser scanned back and forth across the cell, locally photolyzing a solution of “caged” receptor agonists outside the cell. The freed agonists bound nearby nicotinic acetylcholine receptors on the cell surface, opening ion channels in the membrane and thus generating electrical current (detected by an electrode within a pipette, lower right). Each pixel represents a single current measurement: the greater the current, the more densely packed the receptors on the cell surface.
View larger: PDFPNAS, 91:6629-33, 1994. Copyright (1994) National Academy of Sciences, U.S.A.In the 1980s, neuroscientists were facing an imaging problem. They had developed a new way to detect neuronal activity with calcium dyes, but visualizing the markers proved challenging. The dyes...

The time was ripe for a gentler option, and Denk developed two-photon excitation microscopy in 1990. Instead of using a single photon to excite a calcium dye, scientists could use two photons and half the illumination energy—red or infrared lasers, instead of ultraviolet. The scatter of such low-energy rays caused far less damage to surrounding tissue.

The technology had another advantage. To excite a molecule, both photons had to reach it simultaneously. This meant the laser could only excite a tiny patch of tissue where its photons were most concentrated, giving scientists a new level of precision.

In 1994, Denk demonstrated the utility of two-photon microscopy by mapping receptors embedded in the cell membrane of a mouse brain-tumor cell. To locate the receptors, he exposed the cell to a solution containing an inactive, “caged” receptor agonist. Hitting the agonist with two red photons was like springing a lock, liberating the molecule to bind receptors in its immediate vicinity and alter the cell’s electrical potential (see image).

See "Microscopy's Growth Through the Years"

But two-photon microscopy’s greatest strength—and the basis for its enduring popularity—proved to be its ability to visualize neurons in living brain tissue without killing the cells. In 1995, Denk and Rafael Yuste, working together at AT&T Bell Labs, imaged neurons from a slice of rat cortex. The duo’s experiments demonstrated that activating both cells on either side of a synapse strengthened their connection more than stimulating either cell on its own (Nature, 375:682-84, 1995).

Two-photon microscopy combined with calcium imaging “completely changed my research,” says Yuste, now a professor at Columbia University who studies cortical circuitry. “It changed everybody’s research.” These days, he says, hundreds of groups use the technique.

Before two-photon’s debut, scientists had been exploring the brain using slices only micrometers thick, recalls György Buzsáki, a neuroscientist at New York University School of Medicine. “Now you could look at the living brain with the same precision that you had done before in slices,” Buzsáki says.

Yuste says he’s proud of what he and Denk accomplished. “But now I go to meetings where everyone is presenting two-photon calcium imaging, and no one knows, or remembers, or cites our work,” he says, laughing.