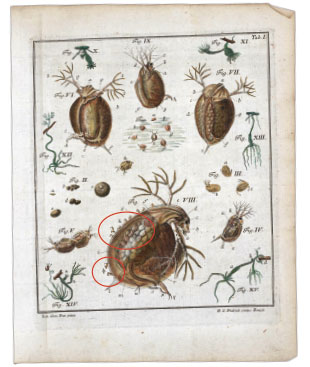 THE LIFE OF A WATER FLEA: The first of three engraved and colored copper plates in Jacob Christian Schäffer’s The green polyps: the tailed and tailless pronged water fleas and a special kind of small water eel shows various stages of the female Daphnia magna life cycle. Figure I, life-size adult animals; Figure II, eggs; Figure III, embryos; Figure IV, juveniles; Figure V, two entangled females that Schäffer mistakenly thought were mating hermaphrodites; Figures VI and VII, magnified adult females from different angles; Figure VIII, a magnified adult female with the right side of the carapace removed to show the inside. The plate also shows to scale the even smaller protozoans and rotifers (h and k, respectively; circled) that attach to the carapace, the first illustrations of epibionts (organisms that live on another creature). Figure IX, a different species, Simocephalus vetulus, which Schäffer called the “tailless pronged water flea”;...

Jan Swammerdam, a pioneering Dutch microscopist, first illustrated the 2- to 5-millimeter-long animals in 1669 as minuscule, birdlike creatures with a pointy beak for eating and antler-like antennae for swimming. Schäffer’s work, less than a century later, “is in a different league,” says William Ashworth, a history professor at the University of Missouri, Kansas City.

The work of Swammerdam and others was “so incomplete that I was left to make not a few improvements and additions,” Schäffer wrote in his treatise (as translated from German by this reporter). “I couldn’t imagine that these otherwise sharp-sighted men could have seen this incorrectly.” For example, the animals only have one eye, instead of the two that previous scientists expected to see by analogy with macroscopic organisms. “[Schäffer] was able to divorce all his preconceptions and see [Daphnia] for the unusual creature that it is,” Ashworth says.

In addition to the detailed illustrations accompanying the manuscript, Schäffer’s colorful observations of the animal’s exterior and behaviors make the creature spring to life. The part of the carapace protecting the head and neck “has the shape of a nun’s wimple or a mourning veil,” and the antennae are “arboreal with feather barbs.” Through observation and experiment, Schäffer was able to disprove Swammerdam’s idea that Daphnia had beaks by demonstrating that the animal’s arms are not mere “rudders on a ship,” but create currents to bring food to their mouths.

Schäffer also investigated the crustaceans’ innards by dumping them in alcohol to kill them, softening their shells with a 24-hour water soak, and dissecting them with pins and a delicate paintbrush to reveal nerve bundles, circulatory vessels, hidden mandibles, a digestive system, and ovaries harboring up to 40 eggs. “A man with a very crude microscope was able to figure out how [water fleas] functioned . . . without any precedent whatsoever,” Ashworth says. “He was able not only to unravel the anatomy of it, but to a large extent an important part of its physiology, which was very unusual in 1755.”

Apparently satisfied with his detailed description of the water fleas, Schäffer turned to other scientific pursuits, including similarly incisive work on insects and fungi; investigations of color theory; finding new sources of papermaking material, such as potatoes and peat; and designing a washing machine that remained popular for another 100 years. The water flea study may only form a small part of Schäffer’s scientific legacy, but his detailed observations exemplify his keen observational skills.