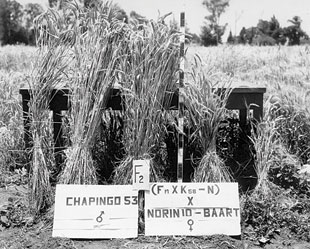 SHRINKING WHEAT: The development of short-statured wheat began with a semidwarf variety called Norin 10. Norman Borlaug bred Norin 10 with multiple other varieties to select for those that had both strong, stocky stems and good agronomic features. This photo shows the widely varying progeny of a cross between Chapingo 53, a tall variety of wheat that was resistant to a fungal pathogen called stem rust, and a variety developed from previous crosses of Norin 10 with four other wheat strains.CMMYTAs an Iowa farm boy who lived through the Great Depression, Norman Borlaug viscerally understood the toll of poverty and hunger. It fueled his determination to feed a global population that was increasing exponentially—and his tenacious belief that the way to do so was by boosting crop yields.

Trained as a plant pathologist, Borlaug joined the Rockefeller Institute–funded Cooperative Wheat Research and Production Program in Mexico (a...

To speed up field testing, Borlaug grew two crop rotations per year, shuttling seeds between his summer fields at the higher elevations of central Mexico and his winter fields near the coast of Sonora, to the north. This incidentally bred photoperiod-insensitive strains that could be grown at nearly any latitude. Altogether, his efforts vastly improved the productivity of farms around the world, especially in poor and hungry countries. His wheat improvements are credited with saving a billion people from starvation.

“There are no miracles in agricultural production,” Borlaug said in his 1970 Nobel Peace Prize lecture. “The Green Revolution in India and Pakistan . . . is based on sound research, the importance of which is not self-evident at first glance. For, behind the scenes, halfway around the world in Mexico, were two decades of aggressive research on wheat.”

Jesse Dubin, who worked with Borlaug at CIMMYT for more than 25 years, says Borlaug insisted that field work was the best way to understand a plant. “Borlaug used to say, ‘If you don’t go out in the field and talk to the plants, the plants won’t talk to you,’” Dubin recalls.

Although Borlaug was admired by agronomists, and even his close colleagues were awed by what he had achieved, detractors say that Borlaug contributed to a loss of traditional farming and the spread of monoculture, herbicides, soil erosion, and an unsustainable dependency on industrial farming practices.

On what would have been Borlaug’s 100th birthday earlier this year, legislators unveiled a statue of him in the US Capitol. But Julie Borlaug says her grandfather was less interested in celebrating his past achievements and more concerned about solving the next generation of agricultural challenges. After thanking the crowd, “he would have turned to everyone in the audience, with his finger pointing, and he would have given them marching orders,” she says. “First and foremost would have been, ‘Less talk, more action.’”